I was excited to return to Nepal for the seventh time. Yes I was hoping to climb another peak, but climbing was not the focus of the trip- nor was sight seeing. Teaching was the focus.
In 2015 I climbed Island Peak and a more technical peak called Kyajo Ri with Karma Sherpa, Da Tenji Sherpa, Jeff Crow, and Joe Meyer. Da Tenji had summited Everest from the north and the south, so it was no surprise that he progressed up the ice-covered terrain above 20,000 ft. with what appeared to be minimal effort. Although Da Tenji seemed very comfortable in the mountains, I also noticed that he did not attach himself to anchors at precarious stances, or check rock protection or fixed lines before committing to them. Karma explained that although Da Tenji had been fortunate to guide on many 8,000 meter peaks, he had never received formal training in mountaineering or climbing. He was unable to afford training through the Nepal Mountaineering Association or Nepal Mountaineering Instructors’ Association, preferring instead to spend his earnings from tourism on his children’s education. 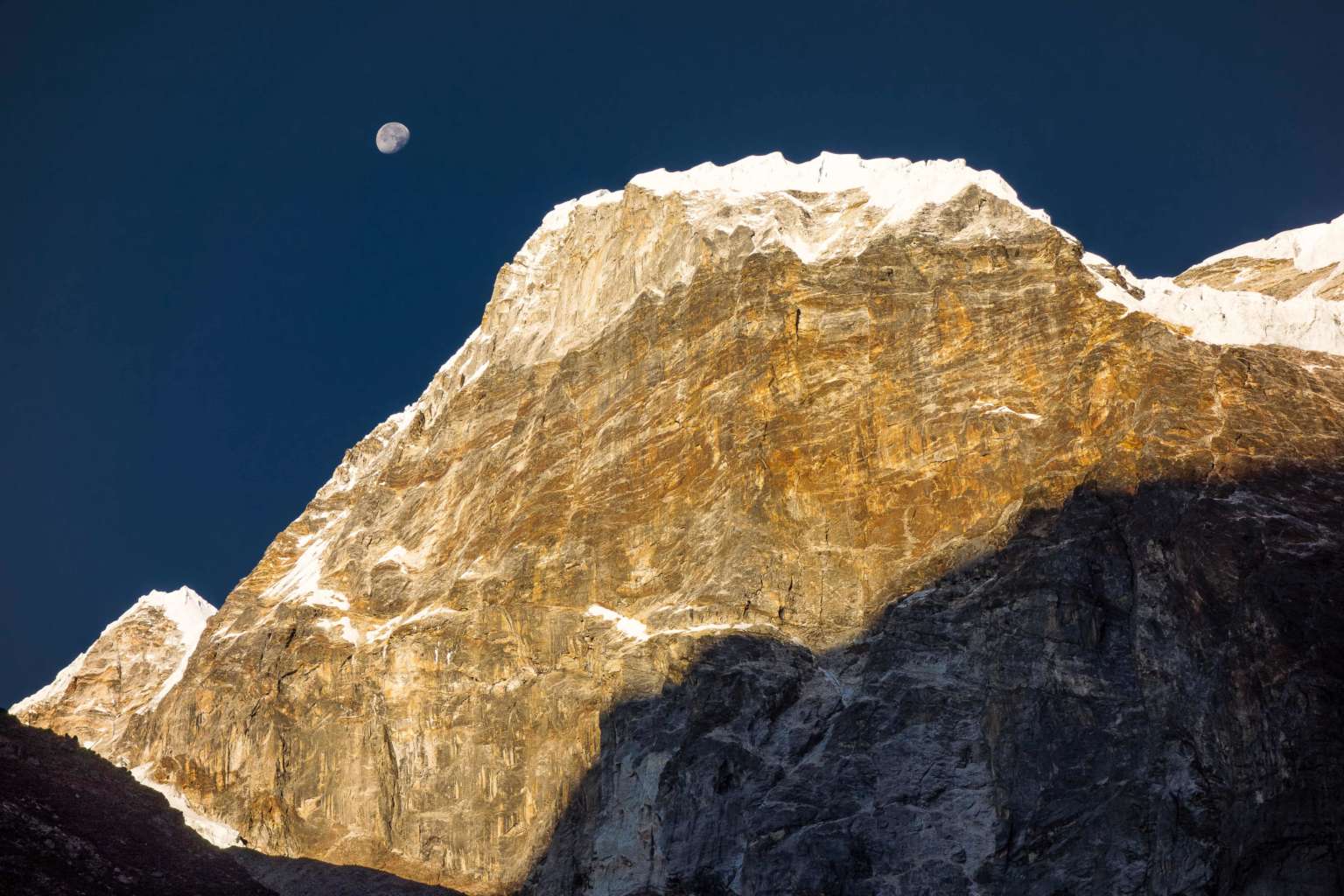 This was not the first time I had seen Nepalese guides with years of experience doing things that appeared to be dangerous. On Pachermo in 2011 I discovered that snow protection placed by a climbing Sherpa of an expedition ahead of ours was insufficient to handle even a small load. The Sherpa’s clients were about to clip into a fixed-line attached to the anchor when I issued a warning and pulled-out the anchor with a single swift tug on the rope. I buried the picket that was anchoring the fixed-line as a deadman for improved strength and tested the anchor with my bodyweight before continuing up to check the next anchor the guide had placed. On AmaDablam in 2011 I improved three anchors and replaced four sections of fixed line that another expedition had set-up two days before. The worst anchor was a single ‘snow bar’ (a thin rectangular piece of steel bent at a right angle and used as a picket) pounded into a wide crack as if it were a piton. A fixed line was clipped into the snow bar as a single piece anchor. This anchor was used at the top of a near-vertical section of rock, which meant climbers were committing their entire body weight to the anchor and loading it through bounce-like movements as they jummared up the fixed line. The snow bar had cracked and bent. It was nearly cracked in half, only remaining attached by a piece of bent metal less than a centimeter wide. 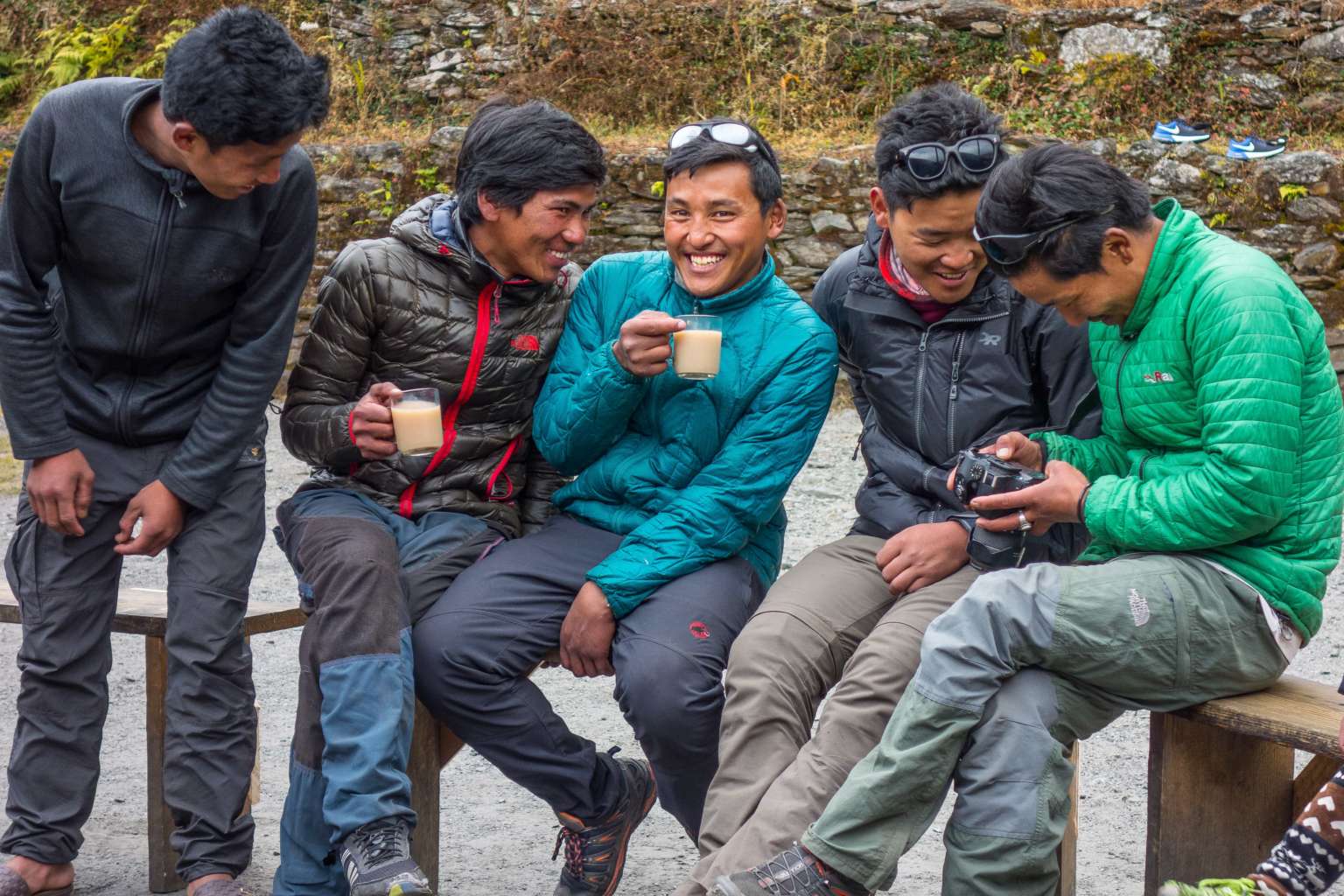 Five months after climbing Kyajo Ri with Karma and Da Tenji, I received an email from Karma. Da Tenji had died while guiding an expedition on Makalu, the fifth highest peak in the world. As details came to light, it appeared that Da Tenji had died of carbon monoxide poisoning along with his tent mate as they cooked inside their unventilated tent at 6,600 meters. Karma told me that he had never heard of carbon monoxide, and didn’t entirely understand why there was a problem with cooking in an unventilated tent. This was commonly practiced by Nepalese guides to stay warm at altitude. Some Sherpas believed it was bad spirits that killed Da Tenji and his tent partner. 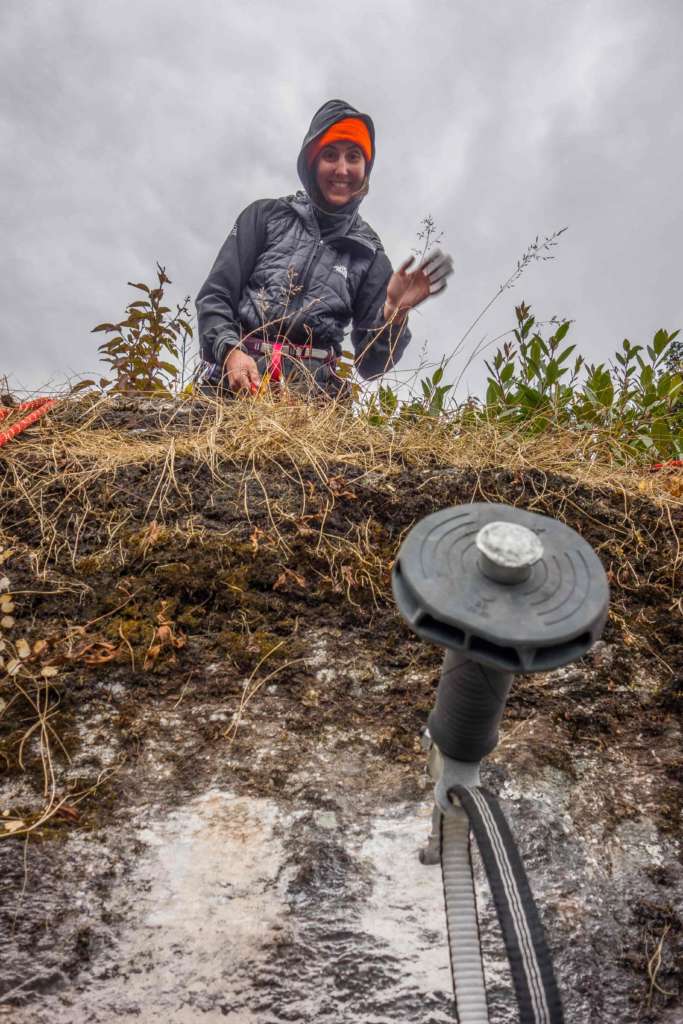 I had spoken with Karma several times about the possibility of providing training free-of-charge to Nepalese students who could not afford mountain guide training. I wanted to provide this training close to the homes of students so they would not have to spend money on transportation and food to get to the course. With the news of Da Tenji’s death I felt that I had waited too long. I felt guilty. I felt responsible in some way, since I had received mountain guide training in the United States, had seen the need for training in Nepal, but had failed to act. I had to act now. 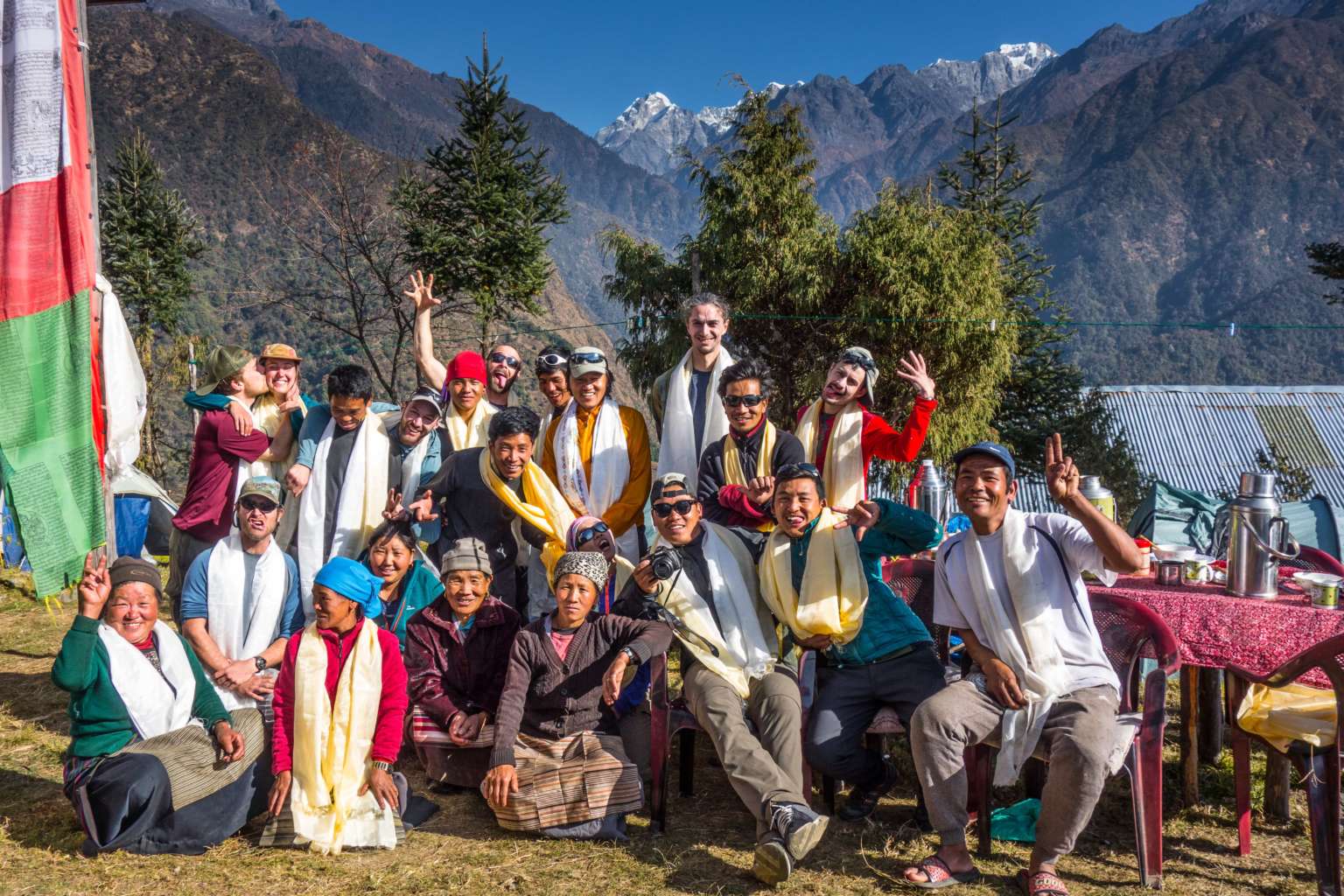 I spent the rest of 2016 putting together a Himalayan Mountain Guide Course. I wanted the course to address problems that are specific to guiding peaks in the Himalayas. The course would include content related to high altitude concerns, constructing anchors with pitons and hand-drilled bolts, client management and communication, understanding avalanche terrain, how to anchor fixed lines, how to ascend and rappel fixed lines with clients, and a host of other material. I then began reaching out to friends and acquaintances who I felt would be able to help with the course. These folks would pay to attend the course at-cost, and money left over would be used to fund Nepalese student scholarships. 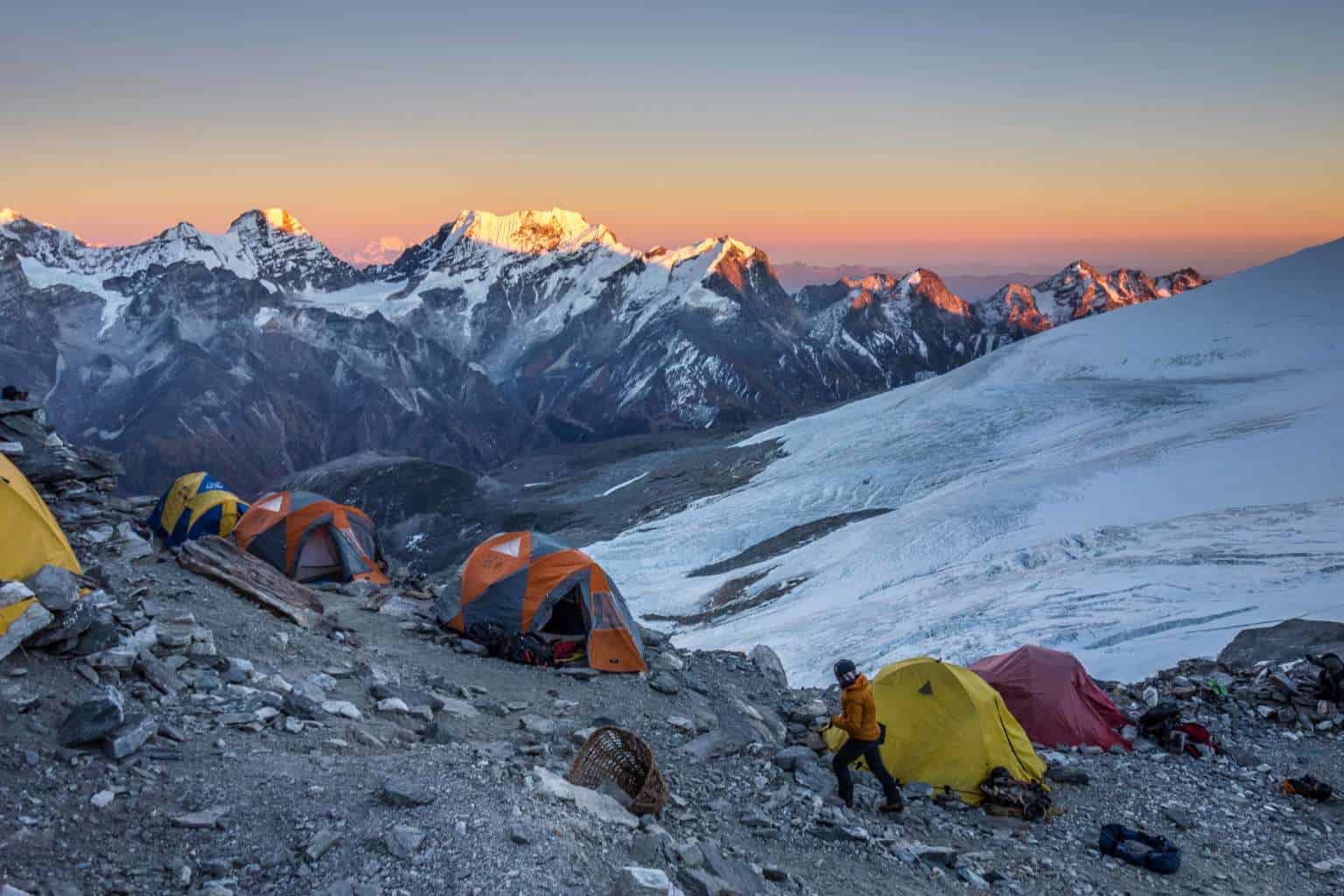 In November of 2017 I landed in Kathmandu and met the eight course participants: Derek Ferguson, Tony Ebstein, Justin Jendza, Ian Grysak, Allen Enrique, Katie Fairman, Jake Wilson, and Jon Bruso. After a short flight to Lukla we met the seven Nepalese students: Dawa Sherpa, Sonam Sherpa, Dorje Sherpa, Chhongba Sherpa, Ang Rita Sherpa, Lhakpa Sherpa, and Karma Sherpa. We had our crew and the course was under way.
In the coming days we hiked east away from the popular sights of Everest Region. We passed through bamboo and rhododendron forest with occasional views of Numbur, an impressive glacier clad seven-thousand-meter peak that rises high above the valley below. After two days of trekking we arrived in Sibuje Village and promptly began the training.

Contents of a medical kit, what to pack in a guide’s pack, how to stack, flake, and coil ropes, how to set-up a rope for glacier travel, how to treat high altitude illness, what to do when passing through a rockfall zone, and a host of other classes were taught by assistant instructors over hours and days. We also scoured the rock cliffs along the outskirts of Sibuje for suitable climbing sites that we could develop. Justin Jendza was able to identify three possible climbs, and with the help of other assistant instructors he hand-drilled all the anchors and set the bolts. The remaining days in Sibuje were spent rock climbing, practicing rescues, and learning how to place pitons, bolts, cams, and other forms of rock protection.

We continued up-valley through the jungle, finally emerging from the forest alongside a river where a previous glacial outburst flood had gouged the canyon walls. Kyashar, an immense vertical peak, rose high above and dominated the skyline. Also called Charpati, meaning “four sides”, Kyashar has only seen two harrowing ascents. A 2013 ascent by a Japanese expedition earned the trio the coveted Piolet d’Or, the most prestigious award in alpinism. Continuing higher more peaks came into view. Kang Tega, Kusum Kanguru, Peak 41, and Ombigainchan were so impressive that both students and instructors were forced to interrupt classes to head outside each evening and take photos as the sky lit-up an unreal shade of red and orange. And of course there was Mera Peak, the objective we would climb in a few short days. Avalanches poured down its southwest face as we imagined the unreal landscapes we would experience on summit day. 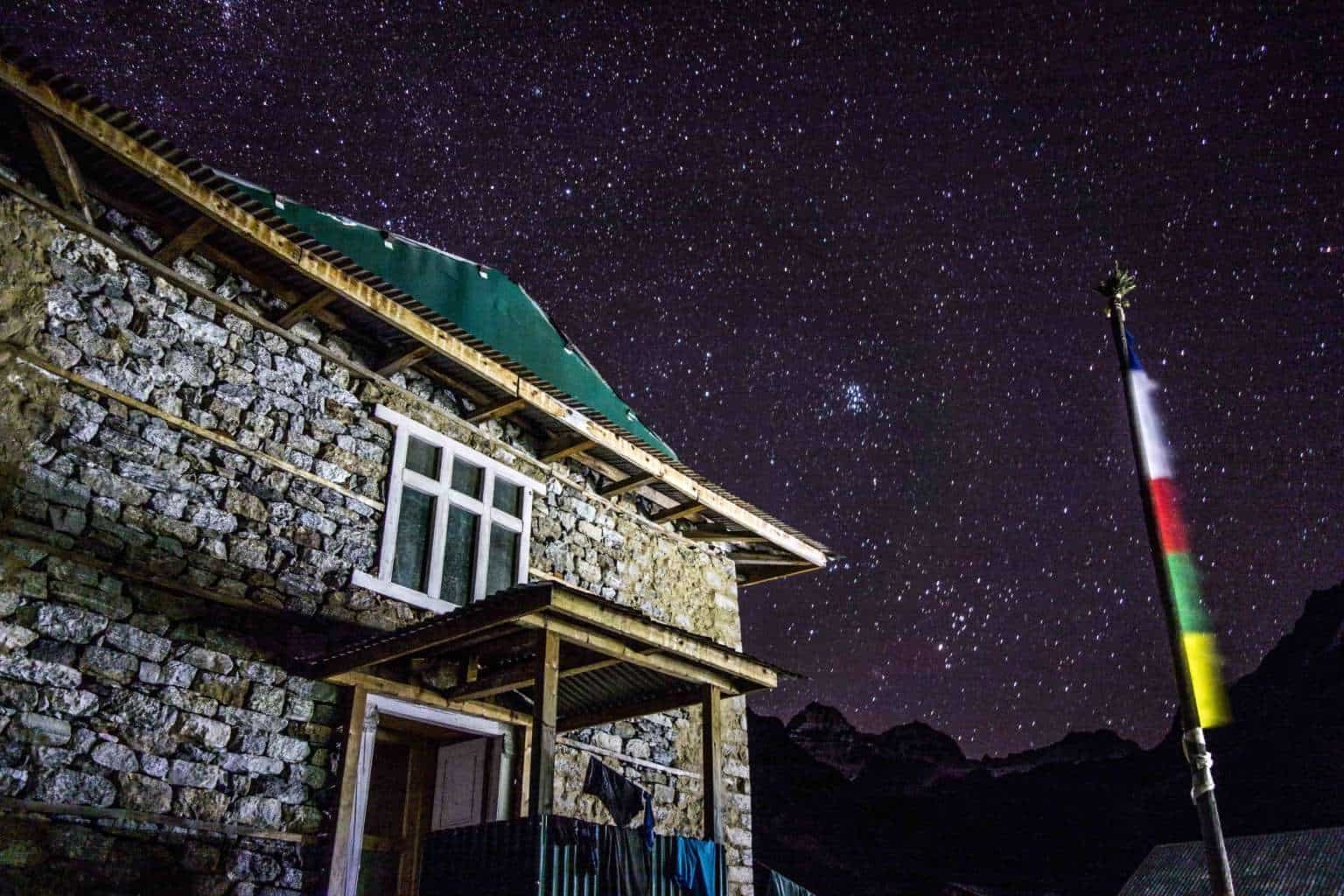 As we neared the Mera La, a high elevation pass above 17,000 ft., our instruction focused on glacier travel, client management, and crevasse rescue. We identified several pitches of alpine ice that would make ideal training grounds for ice climbing, but unfortunately a forecast for high winds and cold temperatures forced us to abandon our plans to teach ice climbing and ascend to high camp early to beat the storm.
The trek to Mera Peak high camp, at around 19,000 ft., is spectacular. More Himalayan giants can be seen from high camp than from the summits of most 8,000 meter peaks. Cho Oyu (8,188m), Pumori (7,161m), Lhotse (8516), Everest (8,848m), Baruntse (7,152m), Kanchungtse (7,678m), Makalu (8,485m), Chamlang (7,321m), Tutse (6,758m), and Katchenjunga (8,586m) to name a few. It’s hard to walk straight without gawking and tripping over your crampons. 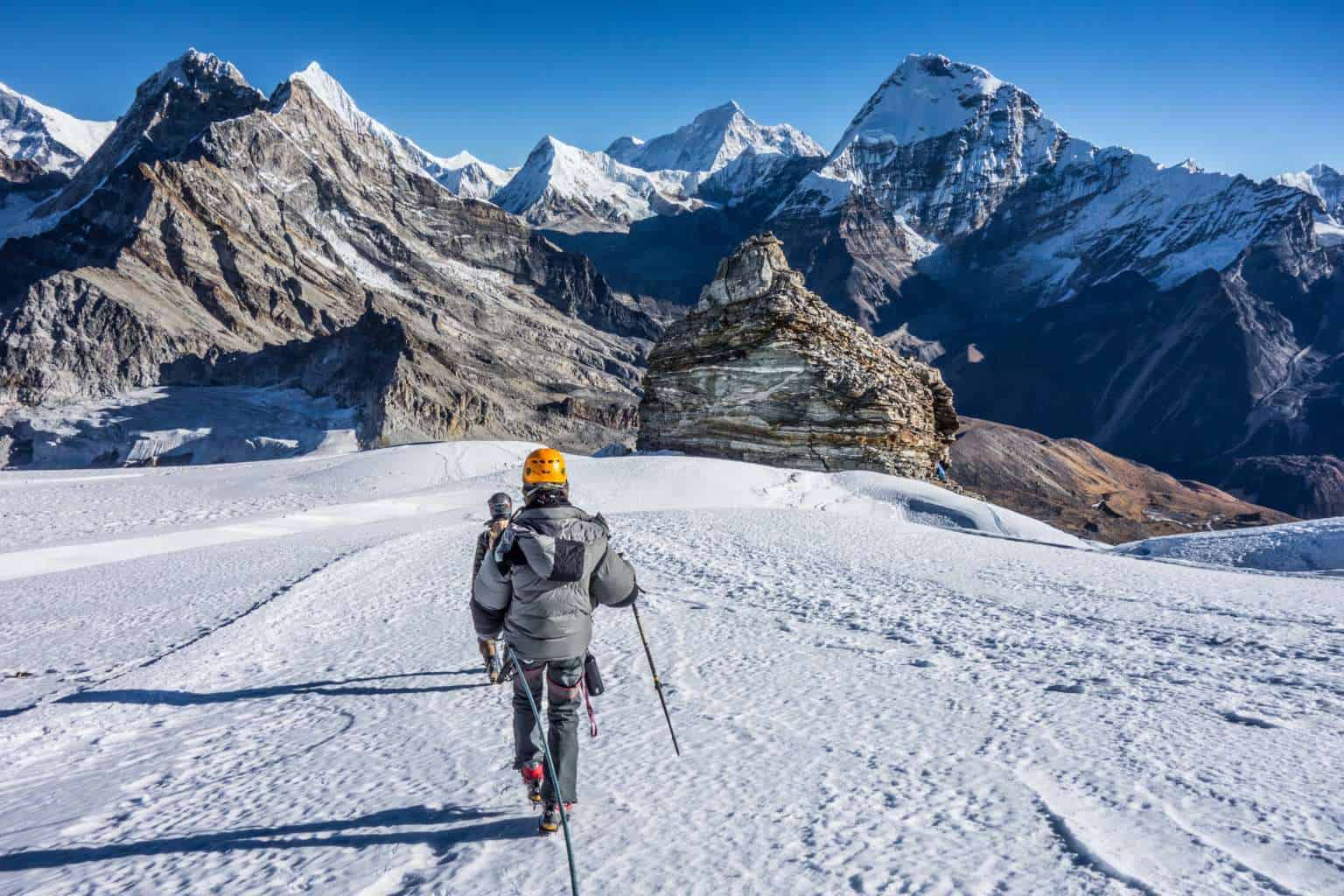 The morning after arriving in high camp we woke well before sunrise and began the slow climb to the 21,247 ft. (6,476m) summit of Mera Peak. We summited shortly after sunrise on a perfect mid-December day. The crisp Himalayan winter air began to churn and blow as we posed on the summit, making for a cold but not overly uncomfortable experience.
After descending from the summit we walked back down valley over the course of several days until reaching the Zatrwa La pass. At a lodge near the pass we staged a practical exam for the Nepalese students. Students were taken through a series of stations where they were expected to demonstrate knowledge, practice skills, and solve guiding problems. At the end of the exam they were given a score based on their performance. Those scoring highest were offered scholarships to attend training with the Nepal Mountaineering Association (NMA) and English language classes in Kathmandu. These trainings are considered essential for those interested in pursuing guiding as a career. 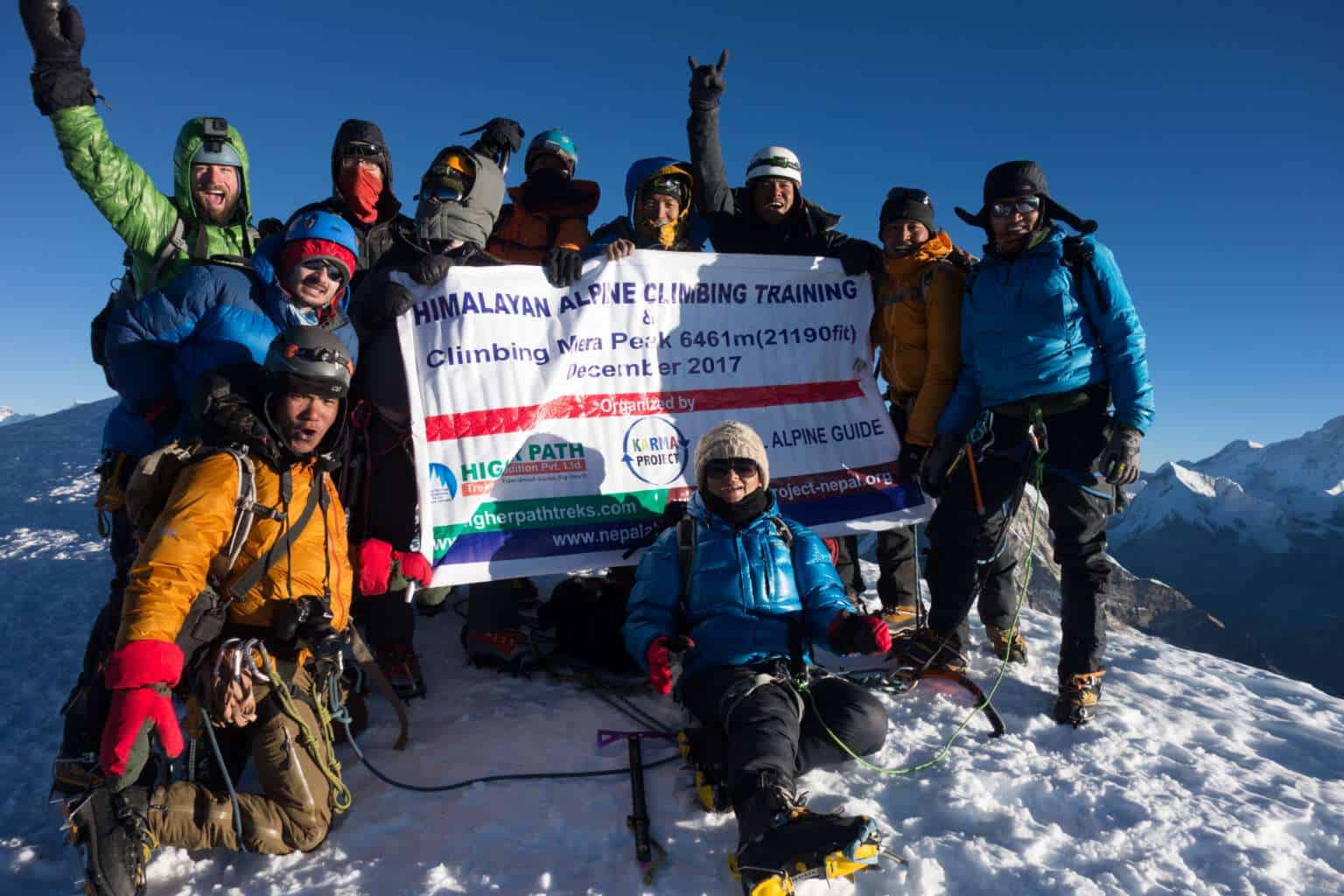 A final celebration rounded-out the course, featuring a dance party and a gear give-away where Nepalese students were able to acquire climbing and camping equipment that they can use while guiding high elevation peaks and treks.
Even though this was the first course of its kind run in Nepal, it was an overwhelming success. All Nepalese students who attended the course were able to land guiding work with large international companies the following season, and all were offered jobs working on 8,000 meter peaks such as Everest. I hope that the training provided is able to keep these strong young people safe for years to come, and that the income they receive through guiding will allow them to pursue higher education and a higher quality of life for years into the future.