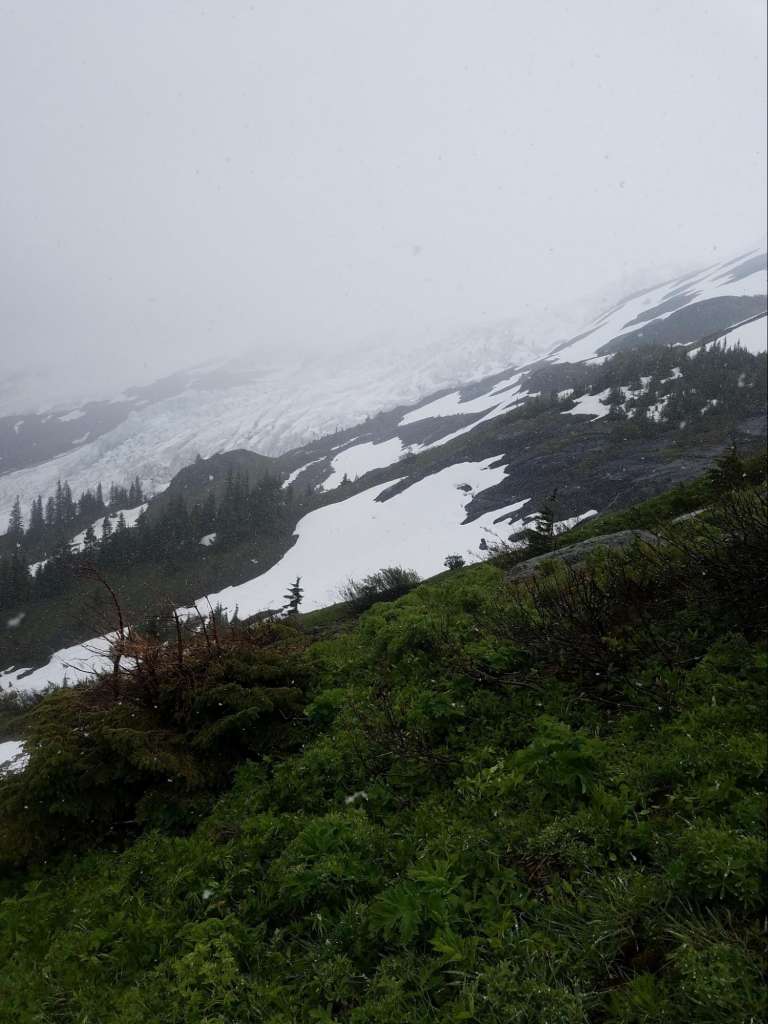 With a dismal forecast ahead of us no one knew what to expect as the first team left the parking lot along the Heliotrope Ridge trail. We experienced light precipitation as we walked from the 3600 foot trailhead up to our base camp at 5850 feet. At about 5500 feet the precipitation changed from rain to snow. We welcomed the change, as our jackets were nearly all wetted out from rain and sweat. At base camp we hurriedly established our tents in the middle of a squall. Gusts of wind and horizontal snow were coming down more rapidly which only encouraged us in our efforts to seek shelter. We guyed out our shelters before getting inside to change clothes and then began drying off as best as we could.

We ended up receiving between 8-12 inches of snow that night, with approximately double at higher elevations. During our guide meeting we voiced our concerns about the amount of snow received in such a short period and the warming temperatures that were supposed to arrive the following day. The steep aspects of the climb, particularly on and around the Roman Wall, are at the perfect angle for avalanches. This combined with our group’s lack of dry clothing and limited experience on snow were amongst our main concerns. It also would have been significantly more difficult to break a fresh trail through that amount of soft snow. As our conversation continued, we firmly decided that it would be unsafe and foolish to attempt a summit. Of the 12 of us, only the 3 guides had avalanche training. In avalanche terrain, if you choose to venture there during moderate to dangerous conditions which is inadvisable, it is absolutely imperative that all members are properly trained and equipped with beacons, probes and shovels. As we prepared hot water for dinner we voiced our concerns to the group as the snow continued to come down.

We continued to monitor conditions throughout the night in hopes for a break in the precipitation which would allow us to safely conduct skill training on the lower slopes in lieu of a summit bid. The middle of a storm is not exactly the best teaching environment.We began peering outside every hour after 4 am. We knew it was still coming down before that because the tent walls would periodically sag from the snow and require a firm shaking. That, and the fact that several mice diligently attempted to find accessible food in our bags. Between 6 and 7 am the precipitation finally stopped. We emerged from our tents and immediately began draping wet clothing and sleeping bags over the rocks around our camp in an attempt to dry them as much as possible as we prepared breakfast.

We began training as we saw several skiers begin a late start to the upper slopes.During training we covered essential skills for glacier travel and mountaineering to include topics such as tying prusik knots and reviewing their uses, spacing and rope
management on snow and rock, self arrest practice on a rope team, fitting and utilizing crampons, and guying out tents. The precipitation had stopped but our visibility was still limited to around a quarter of mile. Confident in the team’s ability to complete their upcoming climb of Mount Rainier after their training sessions we instructed the team to begin packing their still damp equipment for the hike out.

At around noon the first team departed base camp. Jonah and I quickly consolidated our camp, which was spread out over two different rocky outcroppings because other climbers had initially used the other spaces. We ate a brief lunch of cheese and salami. Not long after the clouds began to dissipate at around 1 pm, giving us our first view of the mountain since our arrival. As we both settled down to take a nap we heard the familiar voice of our friend and leader, Sandeep. We joked that along with bringing the second team up to the base camp that he also brought the clear skies. We had a huddle and discussed our concerns about the rapidly changing conditions on the mountain. Avalanches still remained our primary concern. We had a frank discussion that concluded as it did the day prior. At this point, though we would rise early and depart camp at 3 am, we would not attempt the Roman wall based on our current understanding of the snow consolidation due to avalanche danger. 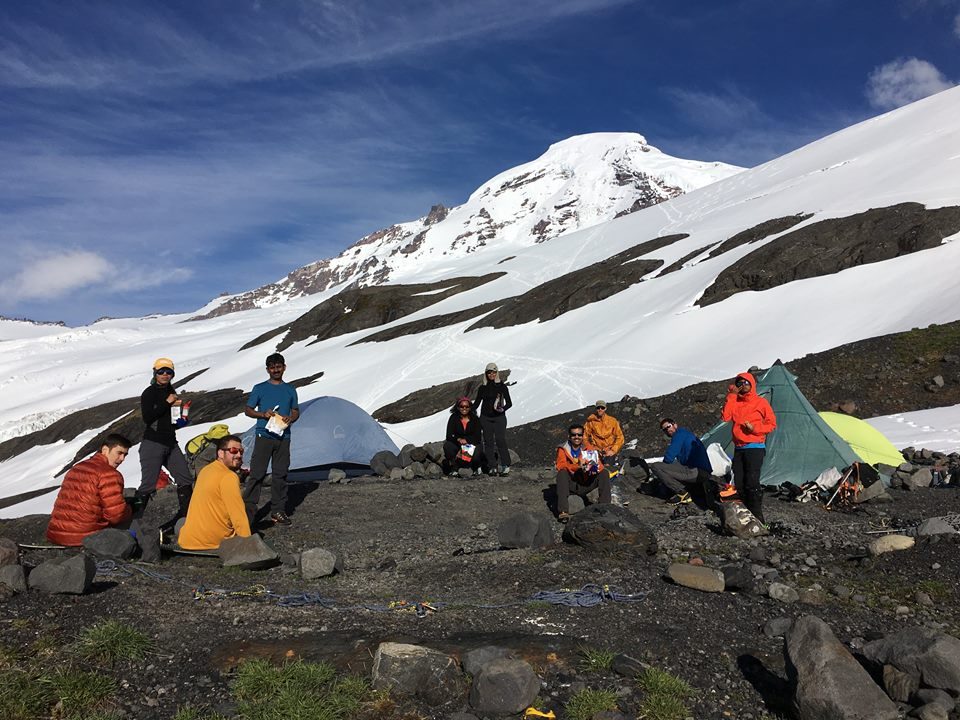 As we began briefing the team, who had just occupied their tents, a large release of snow and rock off the Coleman headwall seemed to confirm our concerns. Nonetheless,we decided to depart camp as if we were attempting to summit. We conducted brief
training, had a casual dinner and resupplied water by boiling and filtering from nearby running streams. Our 2 MSR Reactors made this process quite efficient. We settled down for early bed with the sun still shining brightly in the blue sky, a welcome change from the previous evening. We set our alarms bright and early for 2:30 am and dozed off.

We woke to good weather and began stirring in our tents, double checking summit packs, eating a small amount of food and making final preparations. We walked around to the other tents and checked to ensure the entire team was awake and on track for
departure. Mornings are usually always slow, despite have ropes pre-placed and tied, and equipment laid out. This morning was no exception. Eventually, after the guides ensured everyone was properly roped in, the last of the 3 rope teams departed at around 3:40 am. Visibility was excellent, but snow conditions were suboptimal. The front rope team postholed a fair amount as they helped to established the fresh bootpack ahead of them.The slopes rise very quickly after departing camp and soon we were atop the ridge over 6700 feet, having gained 1000 ft from our camp. We had departed camp after havingmade the decision to not wear crampons, as the snow was still very soft. This proved to be crucial as every pound on your feet takes away much more energy than if it was on your back. We were able to keep a very steady pace, catching groups ahead of us and going through the upper camps around the Black Buttes. 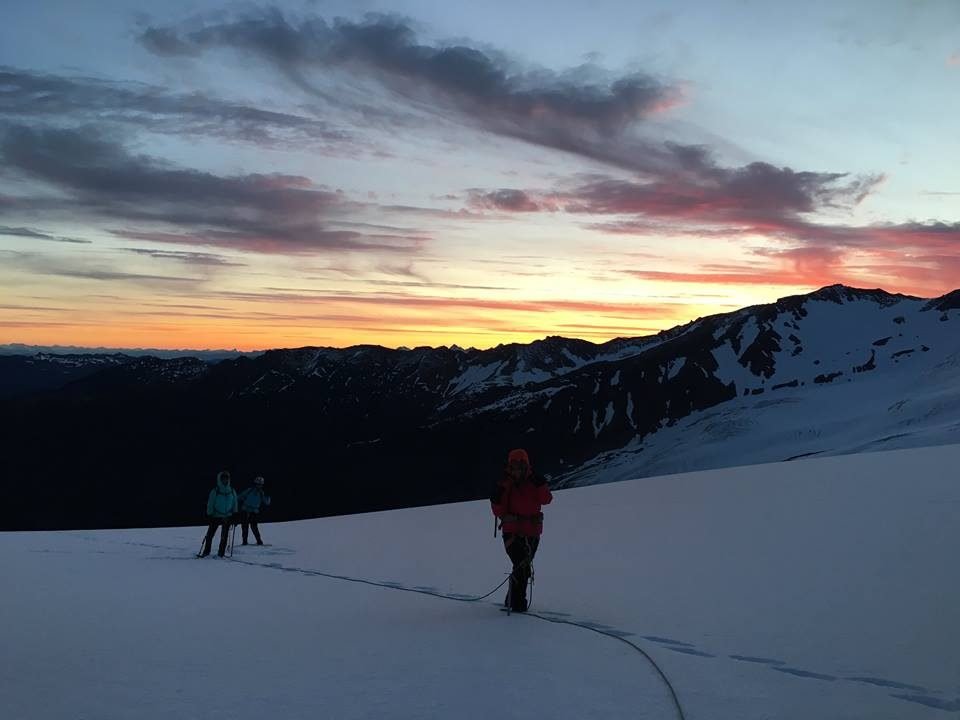 Every hour or so we took light breaks, instructing the teams to continue to lightly hydrate and consume some food at every opportunity. As I had just done the climb two weeks prior, I noticed many new ice boulders and debris that had fallen off of Colfax peak when we reached the part of the route that passes it at around 8000 ft. It is crucial to avoid traveling during the peak warmth of the day for this very reason. Nonetheless, not long after making our way through the debris, we observed a small rock and ice release from the south aspect of the Coleman Headwall despite it still being very early. 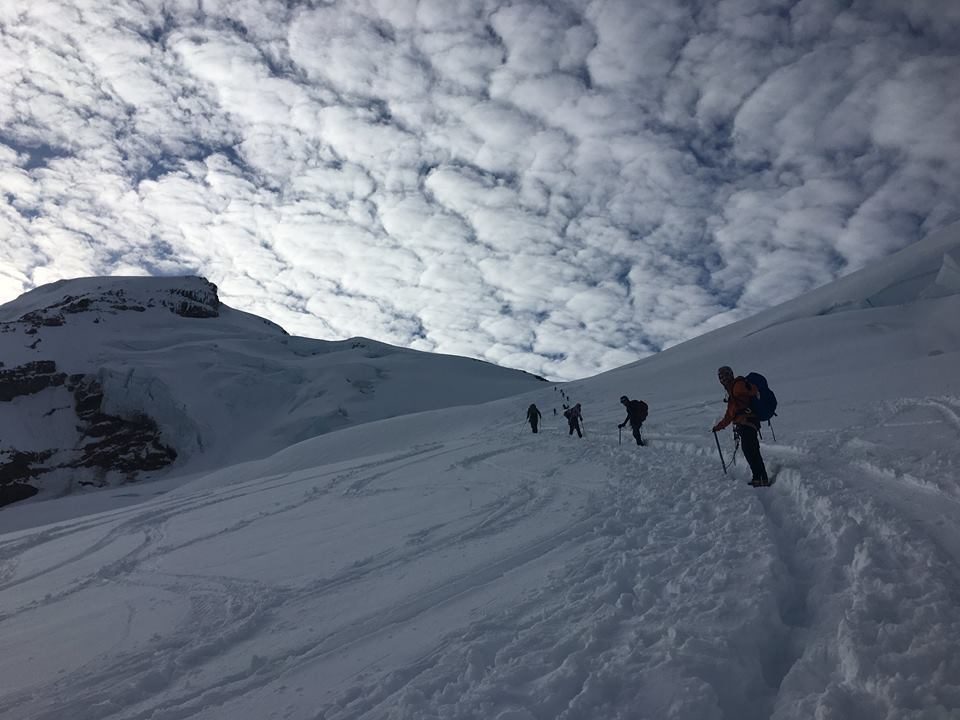 Eventually we reached the small saddle at the base of the ridge that eventually becomes the Roman Wall. We took an extended break for all the teams to consolidate and to discuss the possibility of a summit. This had been our predetermined turn around
point if the conditions did not drastically change from our observations below. While resting, we observed several teams work their way up the Roman Wall, our primary avalanche concern. We had also noticed that the snow had consolidated very quickly andwas very solid and firm as we gained elevation. We were unsure if the layer of fresh snow would bond well enough with the old layer, but apparently the temperatures were high enough, and the snow was wet enough, that significantly more bonding occurred than we had anticipated. This alleviated our avalanche concerns. We discussed this upon Sandeep’s arrival. We all mutually agreed that the bonding was excellent and that our observations below were not longer applicable to our current situation and observations.Sandeep’s team was quite tired at this point and due to this and fairly high winds on the ridge above, they decided that they would not summit. Shortly thereafter after observing the Roman Wall and experiencing the high winds, they began the descent back to camp. 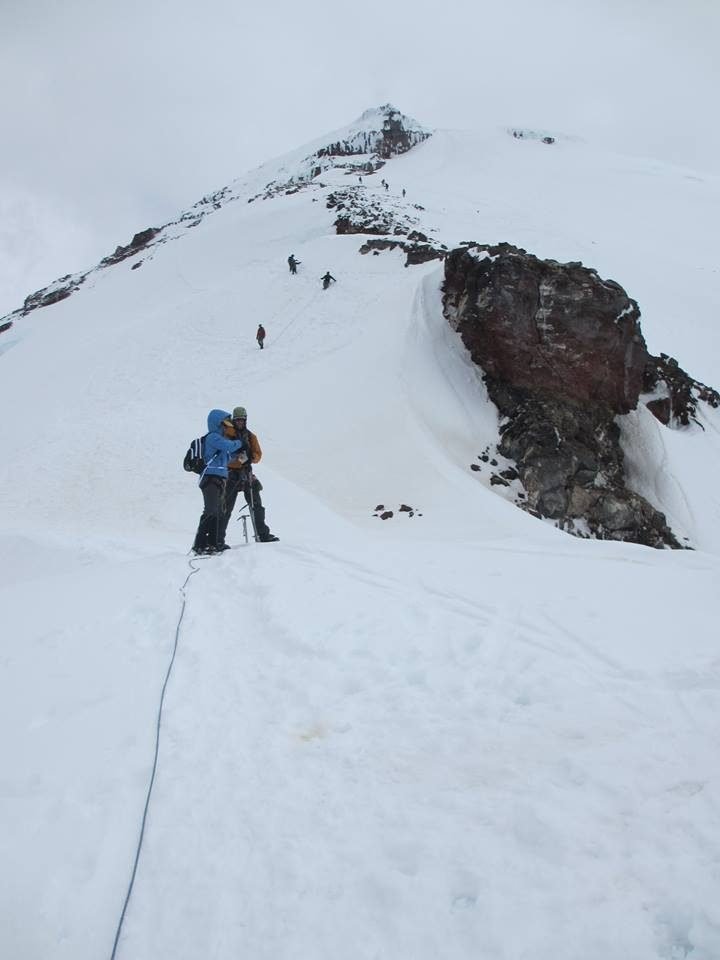 Jonah and I set off up the ridge leading to the Roman Wall. The winds never subsided.The teams made good time up the wall, but overall fatigue was beginning to set in. Upon reaching the crest we took off our equipment and made the quarter mile trek from the crest to the true summit. We snapped a few photos on the windy summit and then departed back to our packs to get a quick snack and some water before the descent. Our total ascent time was precisely 7 hours and we covered almost exactly 5000 vertical feet. 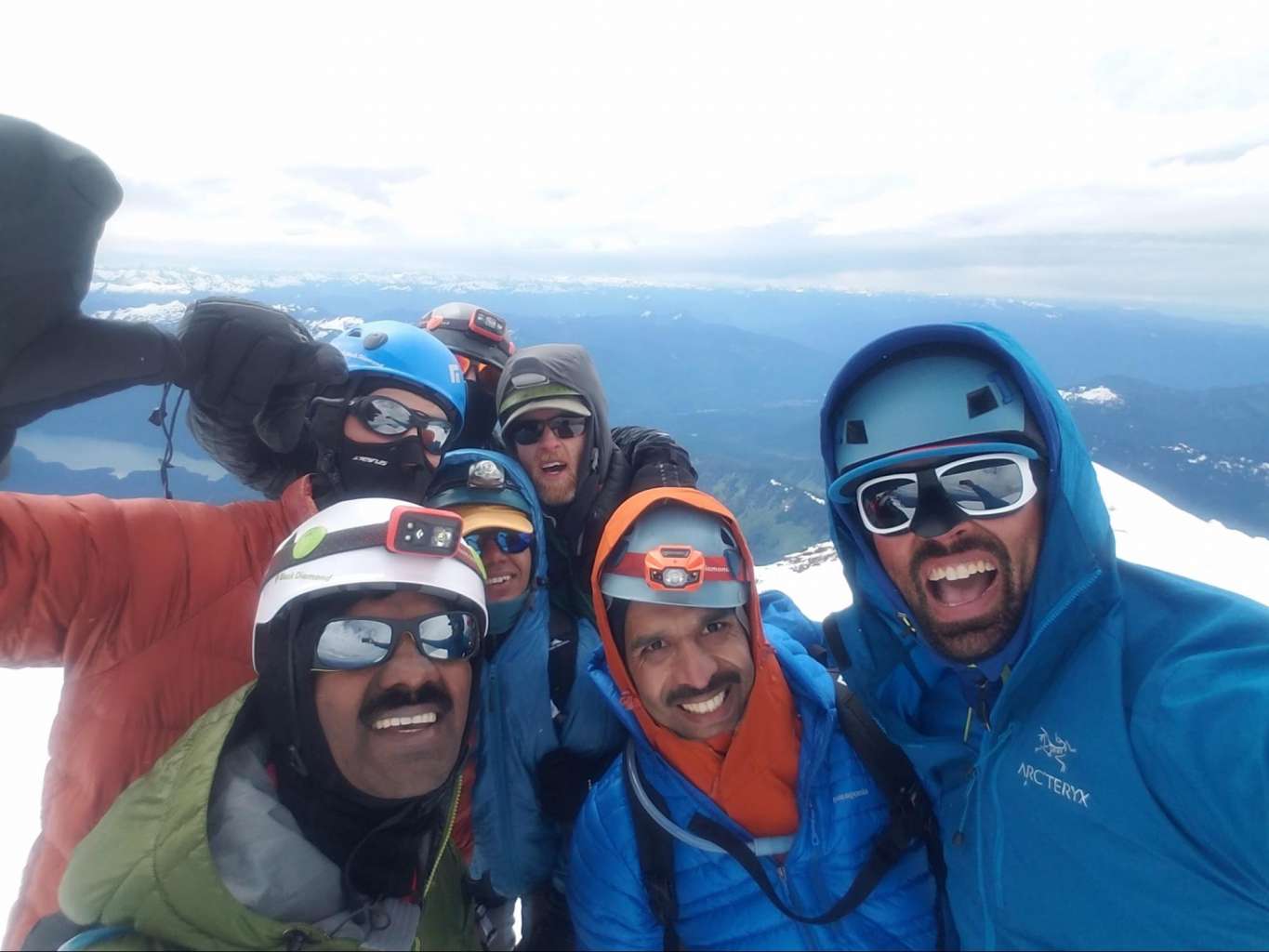 The team’s previous training paid in great dividends as we began the descent down the Roman Wall. Typically, team members begin to feel very uneasy at this point, both because of the unnatural movement of walking down steep terrain and the cumulative
fatigue. However, we moved very efficiently down the wall, passing several other teams in the process. The snow conditions were excellent for plunge stepping as well, a bit too soft for ideal cramponing, but we kept them on because the ridge below was more firm.

Eventually we reached the saddle again, and removed our crampons. We quickly began movement again and shortly thereafter had to remove layers, as the glacier was starting to heat up rapidly. We continued to push the pace, eager to get off of the hot glacier. We took a more direct variation on our descent route, closer to the active glacier, that would save us time and energy. A light boot pack was already established. I began noticing several crevasses opening up in this area, and we reiterated the need for spacing and precise movement. Two team member’s legs punched through the small openings of crevasses that would undoubtedly be massive later in the season. The team had just previously asked why we couldn’t glissade, and this was a perfect teaching moment for them. The early season so far on Mt. Baker has had a very deep snowpack and direct route that has made it very easy to forget that you are on an active glacier. They certainly were thankful to have been roped up and quickly removed their legs and moved along 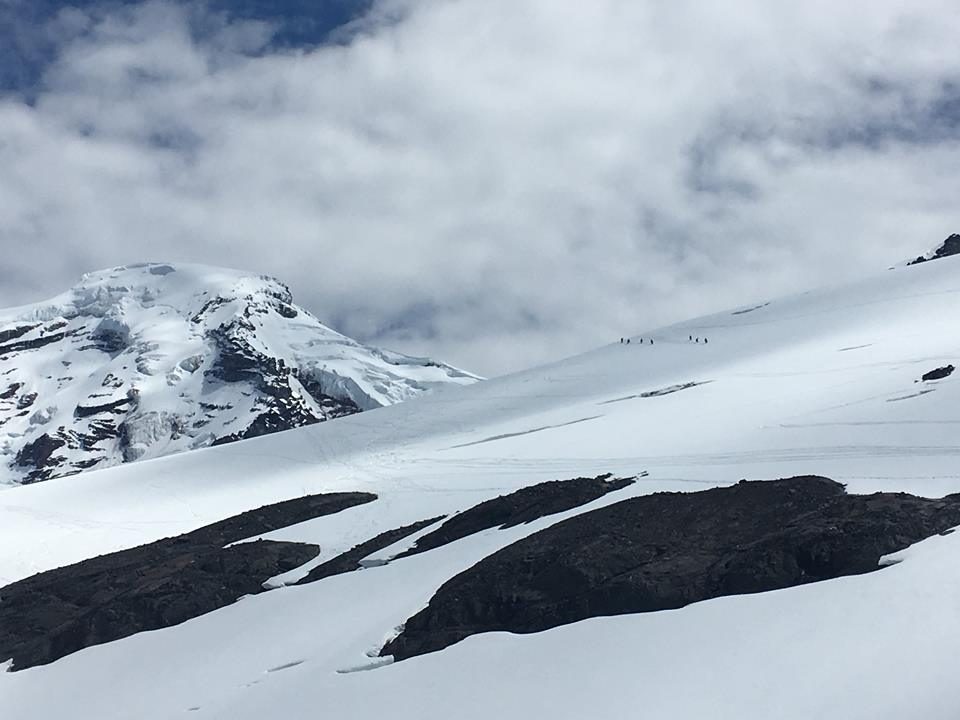 The remainder of the descent was uneventful. We quickly packed and headed out along the Heliotrope Ridge trail back to our cars, and eventually civilization and some delicious food. We were all impressed with both teams on this trip. In better conditions we have no doubt that the first team would have summited, and their fortitude in bad mountain weather was admirable. The second team kept a strong pace the entire time and we were back at the cars exactly at 5 pm, 6 hours after standing on top of the mountain. Another great weekend with great friends spent in the Pacific Northwest!