Team Miyar’s climb of Mount Baker via the Easton Glacier on July 26-28th, 2019.
All eight team members met at the Brickyard park and ride at 7am on Friday July 27th.  Getting to finally meet everyone in person after weeks of planning was great; Jian, Yanyan, Casper, Hua, Colin, Rahul, and guides Simon and Matt. We did some magically rearranging to fit three days’ worth of climbing gear into two tiny cars and we headed north to the trailhead. After stopping for an essential coffee break, we arrived at the Park Butte Trailhead at 11am and started hiking. The weather this summer has been unusually cold and wet, weather that I personally enjoy because it makes climbing a bit easier, but today we had clear blue skies which resulting in scorching heat. 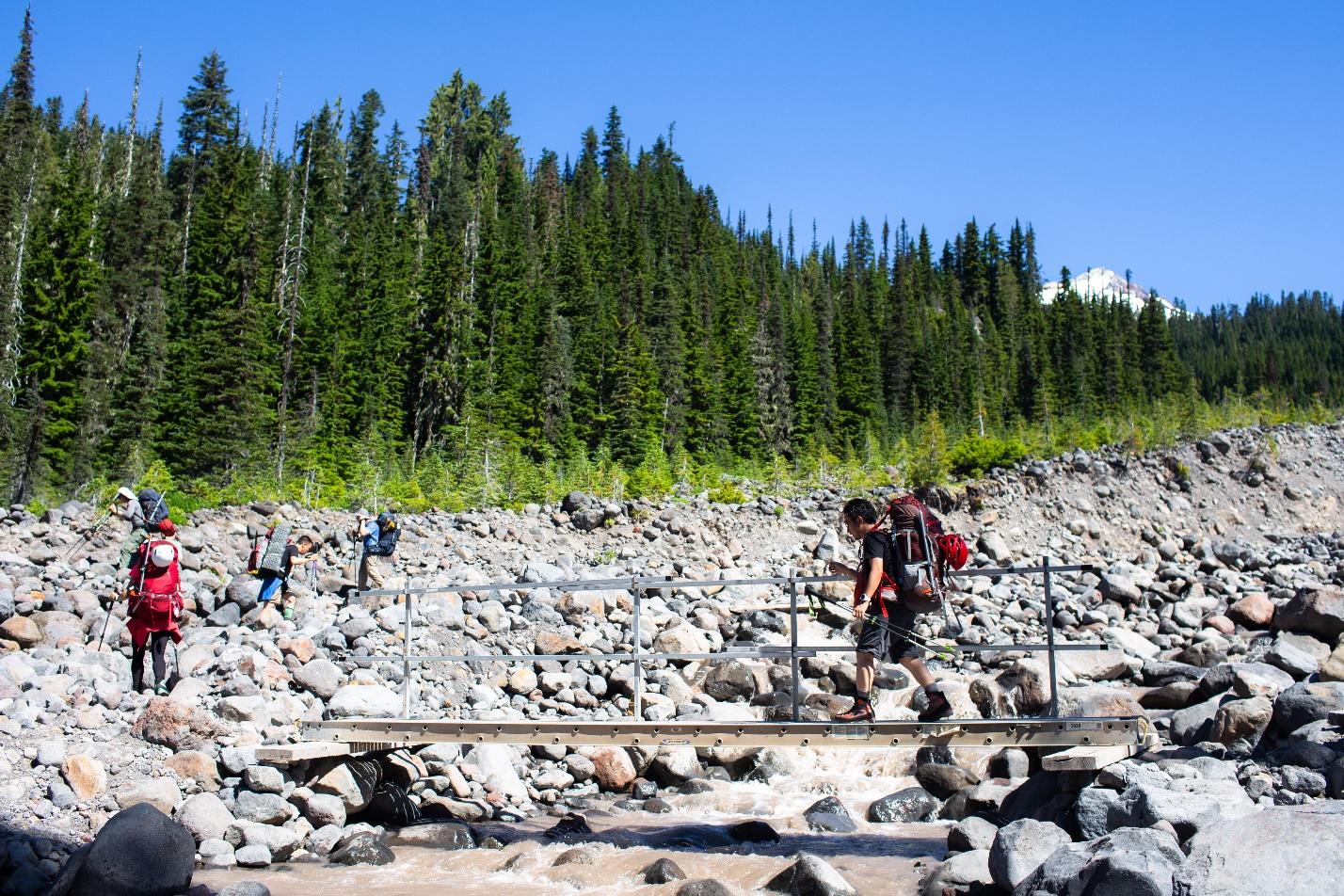 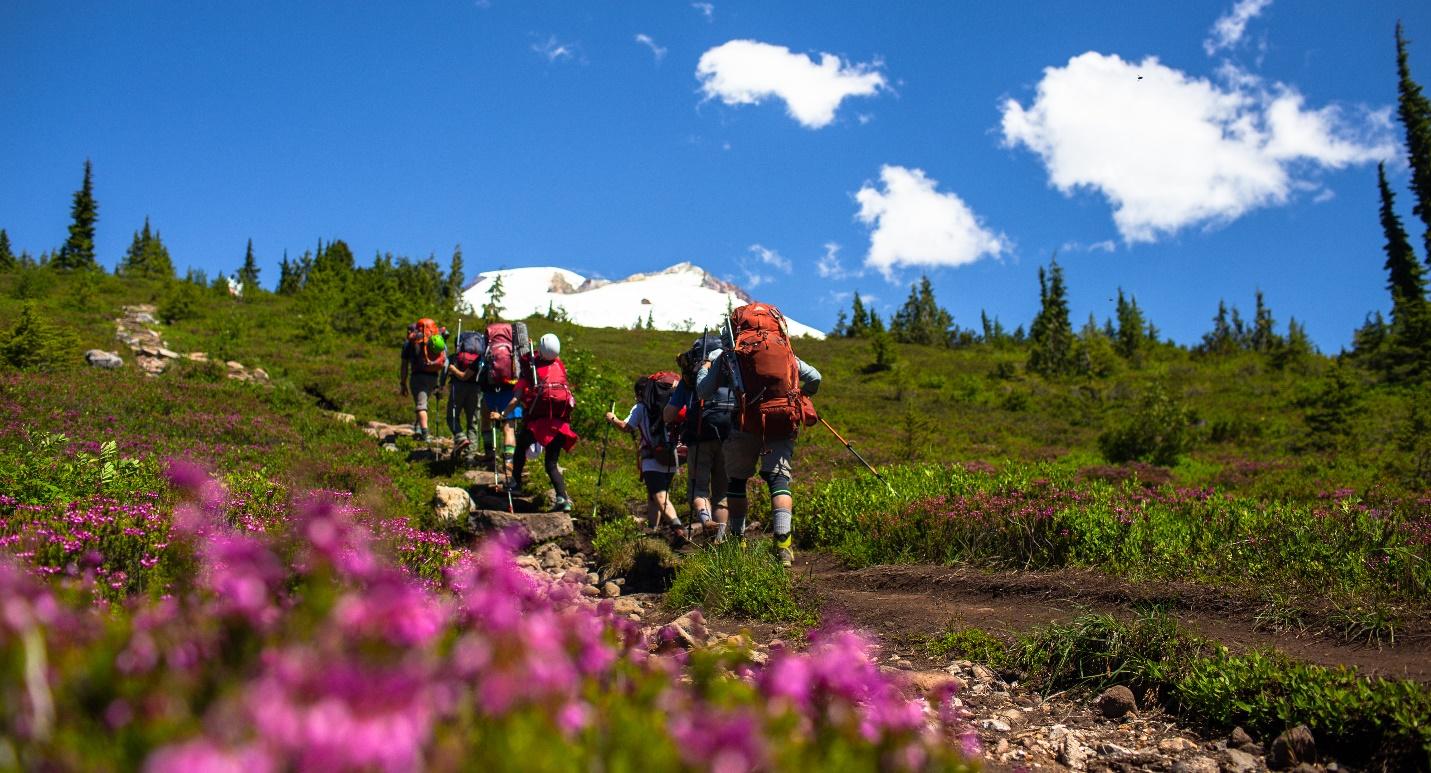 Hiking through the gorgeous Morovitz Meadows.

By the time we reached Morovitz Meadows I think everybody was drenched in sweat and downing water – I drank more water in two hours than I normally drink in two days! We climbed onto the railroad grade section of the trail, a lateral moraine left behind from when the Easton Glacier reached much further down the volcano. It’s a bit sad to see how much the glacier has retreated in the past forty years. 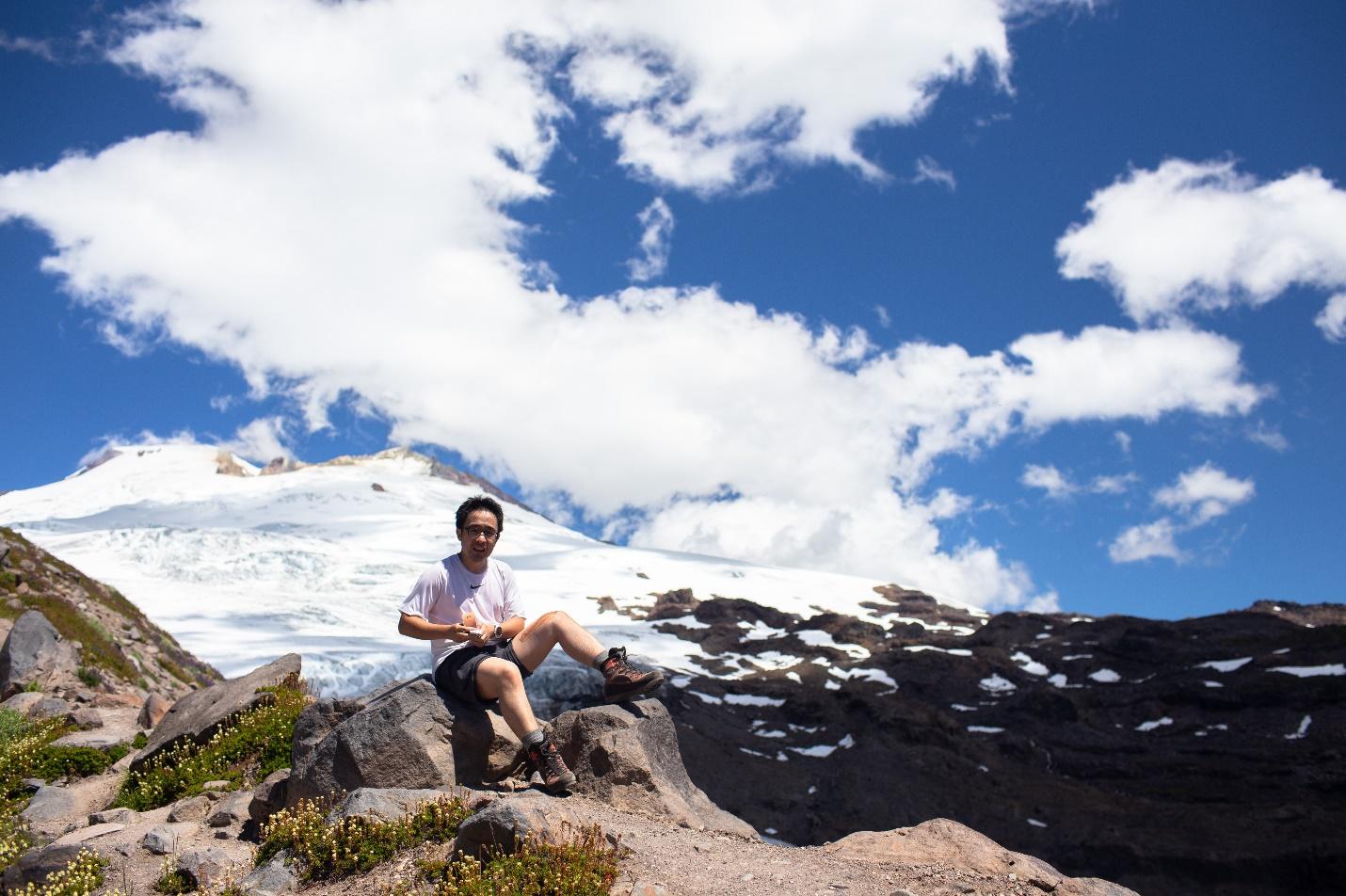 Casper on the railroad grade during a break as he “dials in” his climbing boots.

We saw lots of other climbing groups on the way up, since the Coleman Deming route became impassable due to crevasse conditions early this year almost all climbers are on the Easton route. This meant finding campsites might be a little more difficult, so despite how hot we were, we needed to press on to find a good site. Luck was on our side, and we found an ideal site at 6400ft with running water nearby and incredible views. Once tents were set up and gratuitous amounts of snacks devoured, the team practiced essential snow skills such as self-arresting and various techniques for climbing steep snow slopes. That evening after dinner, clouds rolled in and provided the group with a dramatic sunset to end the our first day of the climb. 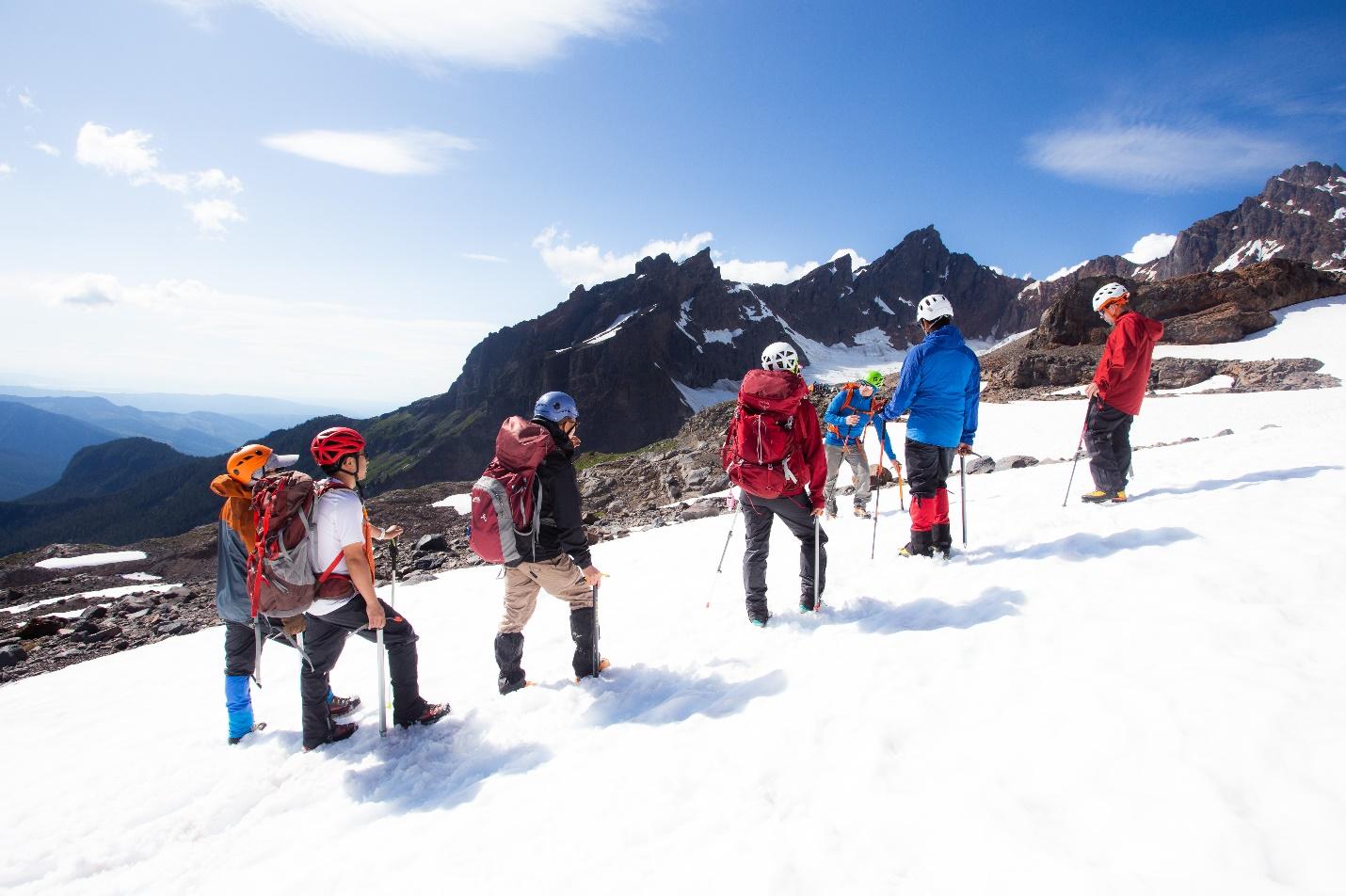 Lead guide Simon teaching the team some of the finer points of mountaineering.

Day two of the trip started out slow- steady rain on the tents woke most of us around 5am, fortunately the rain eased by 9 or 10 am, but the rest of the day would stay quite foggy as clouds through our camp. We practiced more snow skills today, including how to emplace snow pickets and what to do if somebody fell into a crevasse. The rest of the day provided the team with some much-needed rest before the big summit push, eating dinner at 4pm and in tents by 5pm. Tomorrow’s plan is to wake at midnight and start climbing at 1am. Despite the big day ahead of us, the sandman refused to visit me as I laid in the tent listening to Alie Ward’s “Ologies” podcast, and I didn’t drift off to sleep until 10pm. Two very short hours later I was up, joining the rest of the team as we readied our harnesses, helmets, crampons, and clipping into our rope teams. A little after 1am we started climbing, the snow cold and crisp for our crampons. I was a little surprised at our fast we were going, but the group was strong. Before we knew it, we were at 8800ft in just over two hours. “Wow- we’re making great progress, but surely this pace can’t continue”. I was wrong – after a couple quick stops to fix a crampon and blister issue, the team was at the base of the Roman Wall around 4:30am. 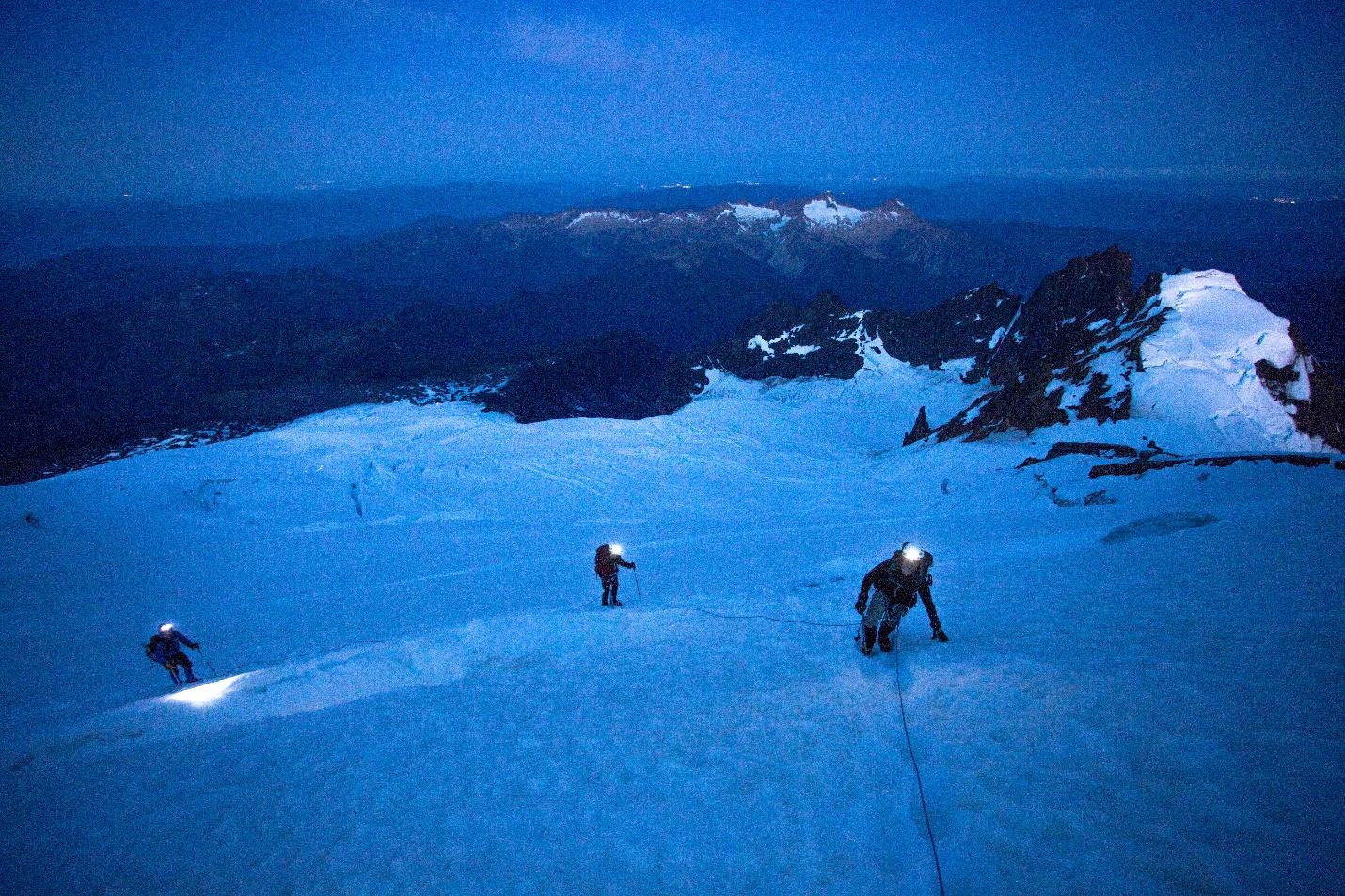 Colin, Yanyan, and Jian crossing a narrow snowbridge over a massive crevasse halfway up the Roman Wall.

Looking into the volcano’s caldera with Sherman Peak on the right and Baker Lake in the background. 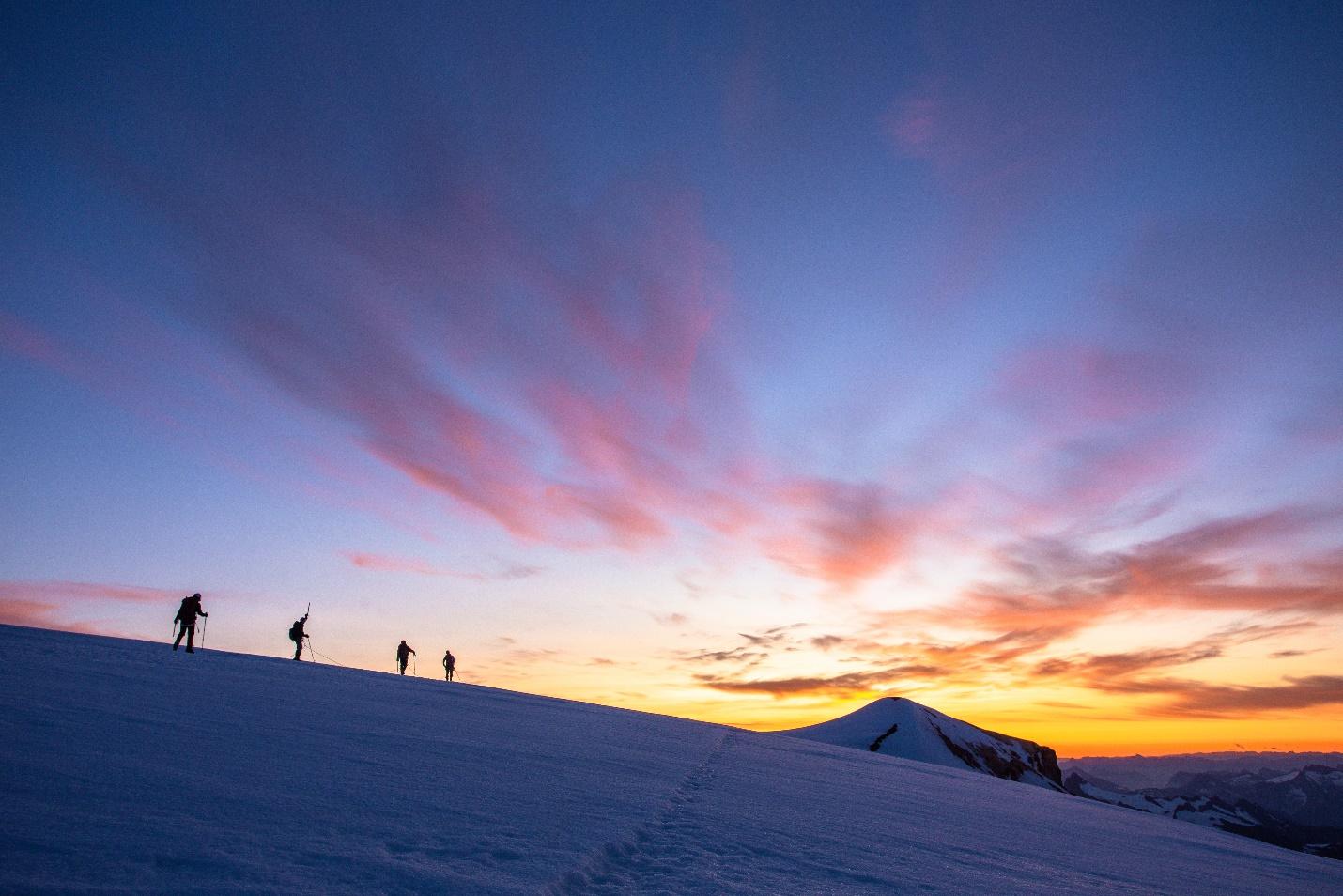 Simon, Casper, Hua, and Rahul trekking across the broad summit plateau to Grant Peak (the true summit). In my five years of climbing this summit was without a doubt the most beautiful summit that I’ve been witness too.

We reached the summit at 5:40am, just 4.5 hours after leaving camp – a remarkably fast pace of 1000ft/hr- a pace that is the gold standard for mountaineering. Everyone was overjoyed, laughter and smiles as the sun burst out from behind the Pickett Range. With only one other party of three on the summit, it was a real wilderness experience. 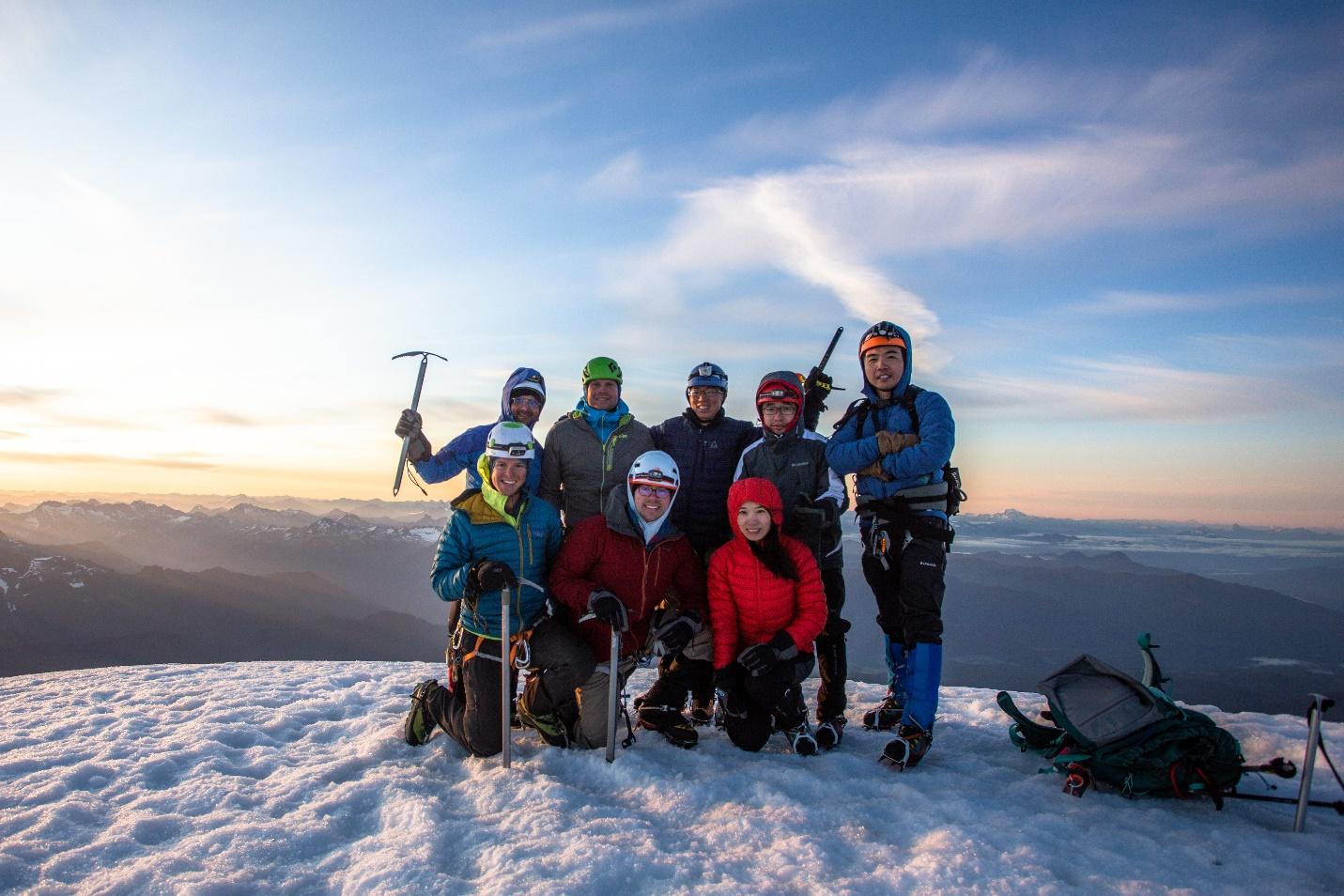 All eight of us on the summit.

After a good 45 minutes on top and lots of snacks devoured, we roped up and started our descent down the Roman Wall. There were more climbers ascending than I’ve ever seen, so many that it was difficult to safely descend until we let nearly 30 pass before we descended the Roman Wall. We passed another 50 climbers between the narrow snow bridge and the caldera. Thank goodness we were descending- it’s not pleasant to summit when there’s more people than a queue for a Disneyland ride. An early summit also provides a safer and more pleasant descent – the snow is still relatively firm for good cramponing and the temperature not yet roasting hot either. 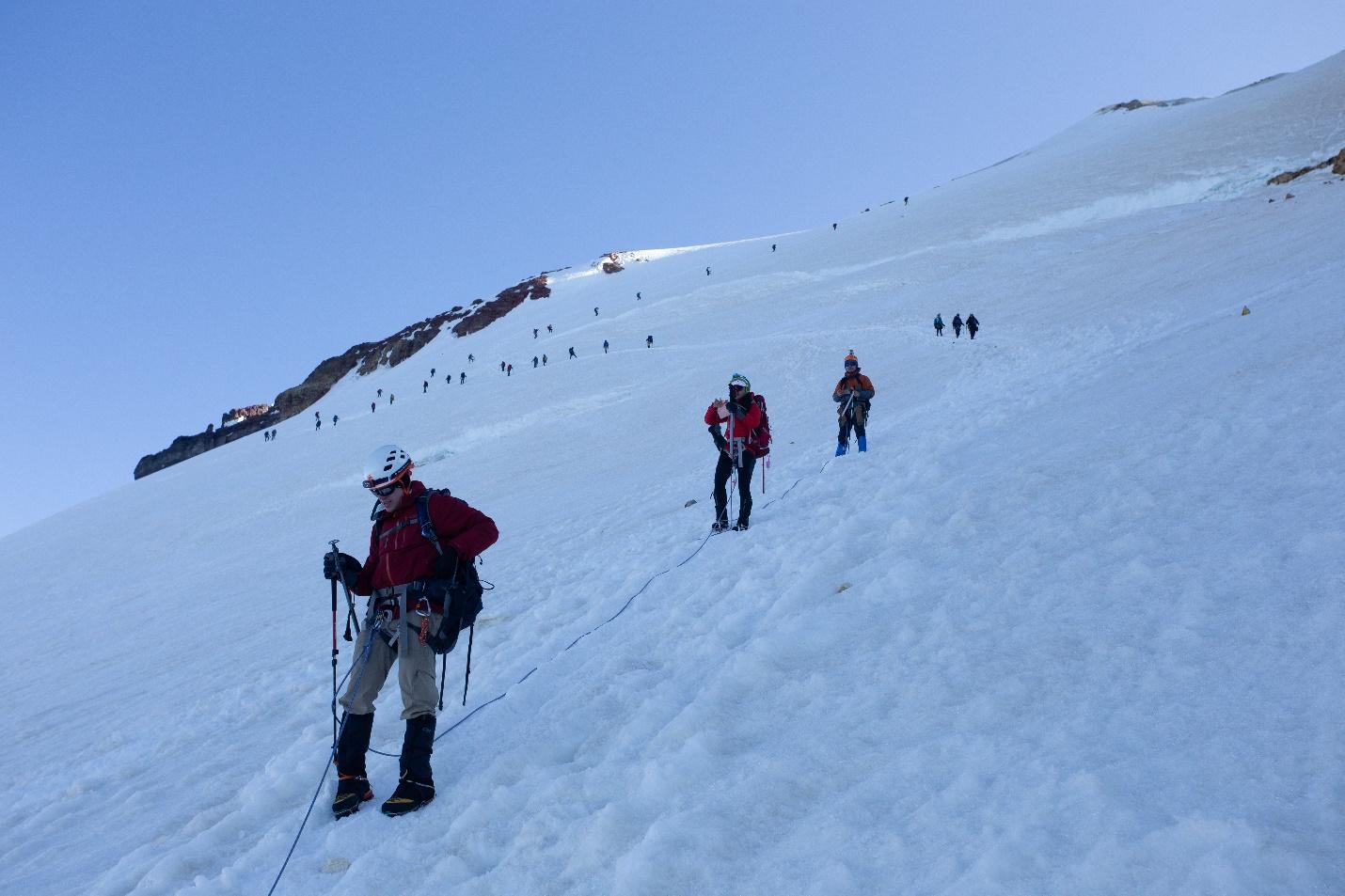 Holy Schmoley – look at all those other climbers ascending the Roman Wall! 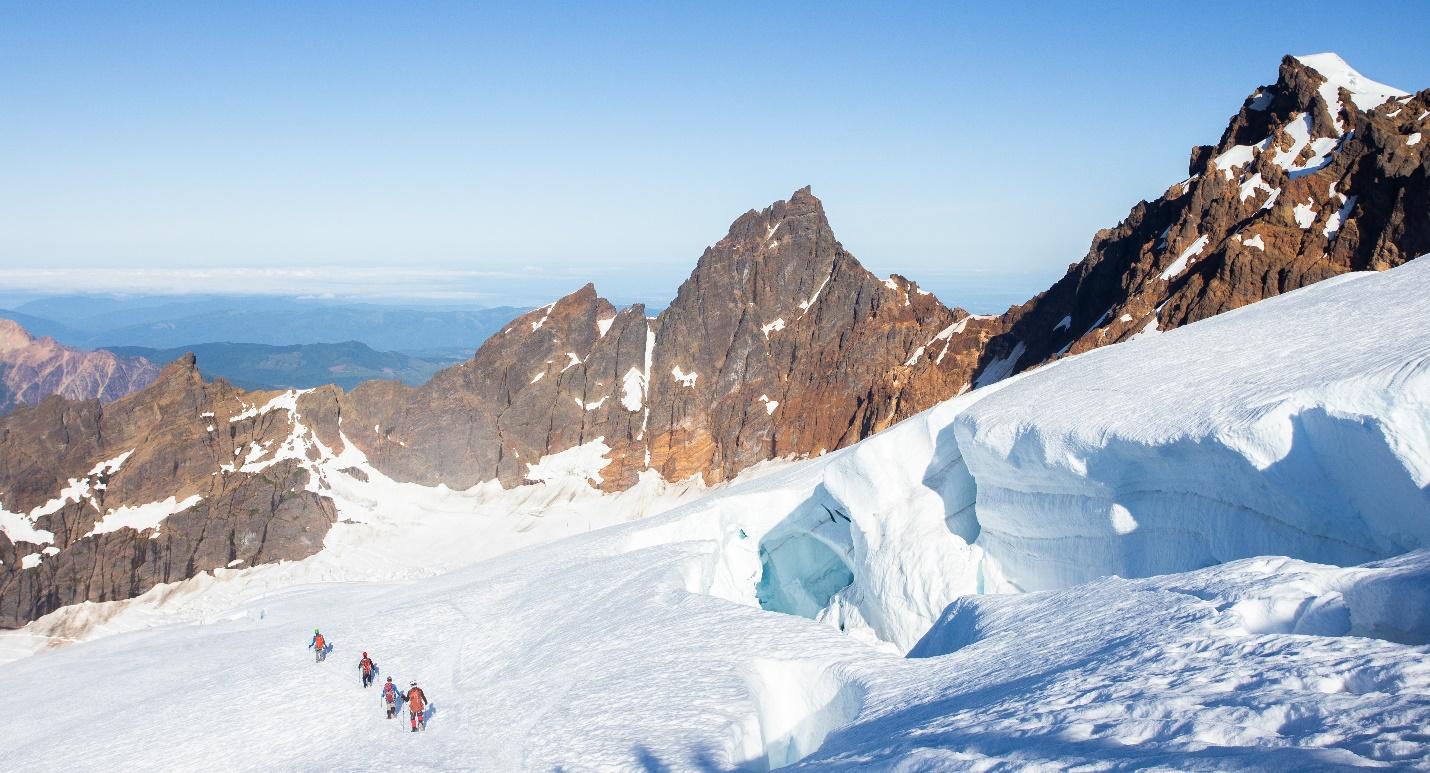 Walking beside a monster crevasse that we could barely see in the dark on our way up. Lincoln and Colfax Peaks are in the background.

At 9:40am we were back at basecamp, pounding water and tearing down camp while reminiscing about the beautiful sunrise. We reached the trailhead around 2:30pm or 3pm. Ideas were thrown around for the post climb meal – would we eat Mexican, Chinese, or the classic post-climb burger and beer? Ultimately, we went with the burger and beer, but only because the Mexican place closed early and the Chinese restaurant was a bit too far away. 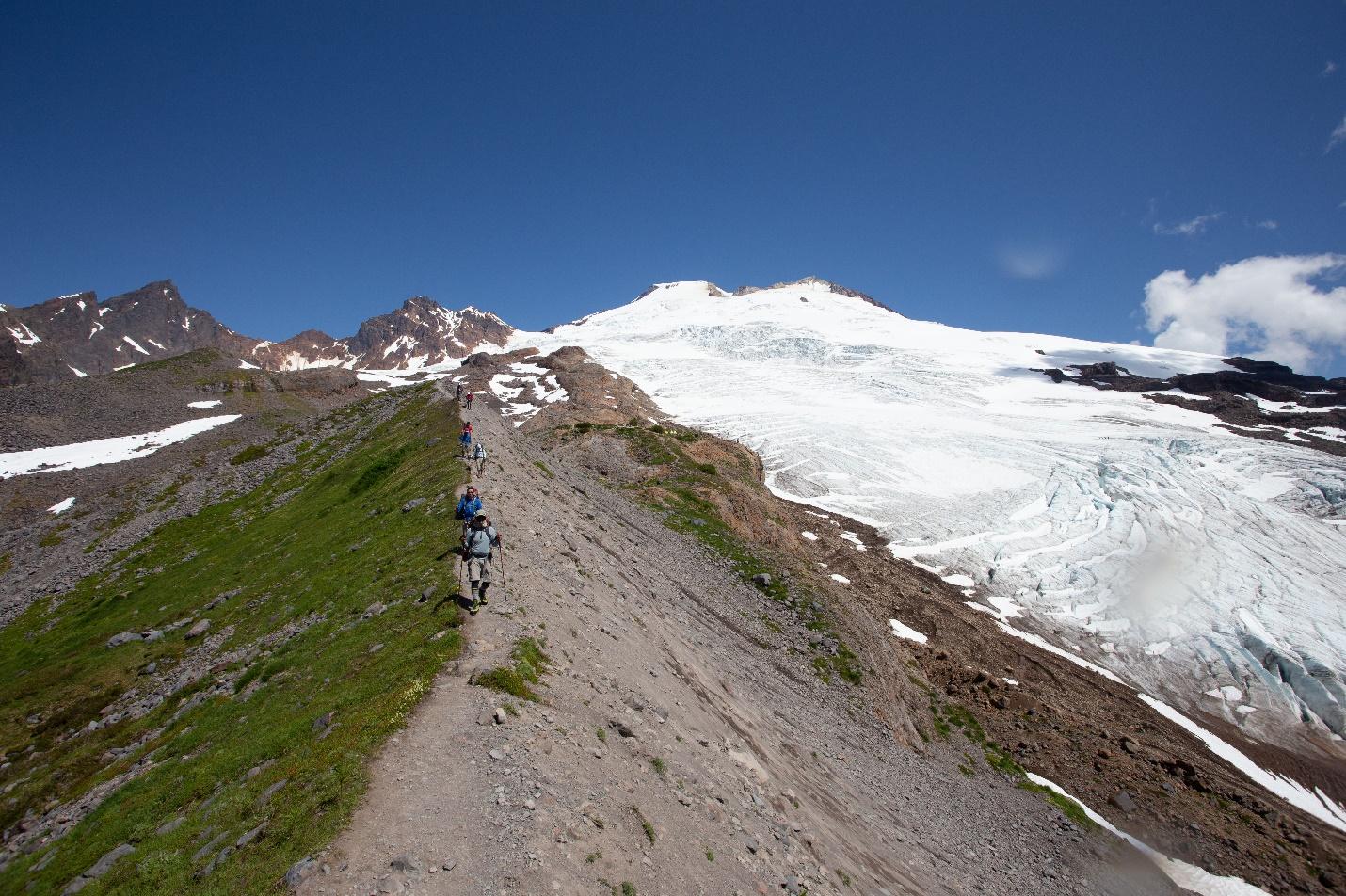 One last view of the mountain as we descended the railroad track.

What a great climb! This trip left everybody from the team even more excited for mountaineering and I’m excited to hear stories from team member’s future trips!