Glacier Peak via the Cool and Gerdine Glaciers Trip Report 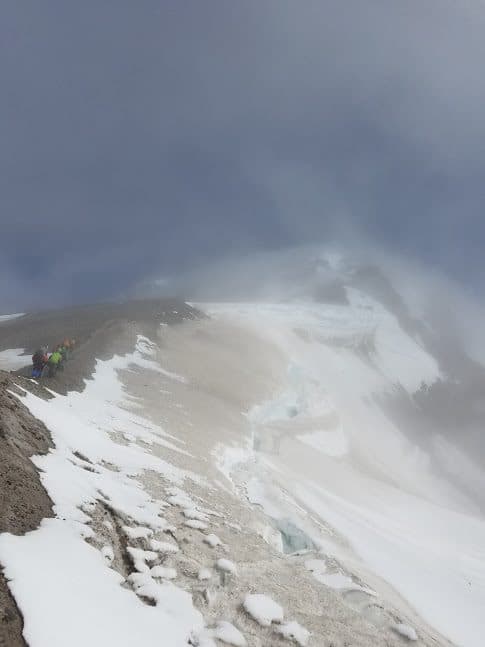 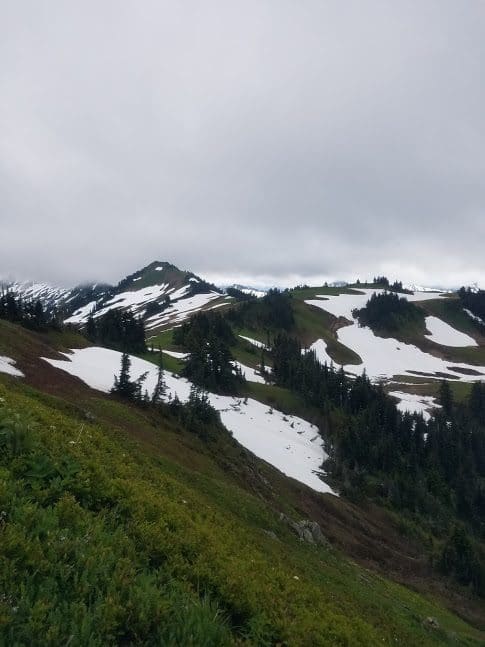 Glacier Peak is an incredibly isolated stratovolcano in the Cascades. Though closer to Seattle than Mount Rainier, it’s limited and difficult access keep it off of many mountaineer’s radar. Requiring over 30 miles round trip to its summit and back, our GPS logged 42, and over 11,000 feet of vertical gain it is the most exhausting of the Cascade Volcanoes. We started our journey up this imposing mountain with an even more imposing weather forecast. Weather predictions in the realm of over 10 inches of precipitation over the next several days were affecting the thoughts in the back of our minds. Nonetheless our strong group set off at a rapid pace through the temperate forests of the Cascades. The lush forests, reminiscent of the Olympic’s Hoh Rainforest, sheltered us from light precipitation as we covered the “easy ground,” the first five miles paralleling the North Fork of the Sauk River. Soon we took rest at the Mackinaw Shelter, eating our first lunch and admiring the unique beauty of the old growth forest around us.

After our lunch, we covered the first large elevation gain of the trip, about 2500 feet, rising through the forest up switchbacks to the top of ridgeline, briefly intersecting with the Pacific Crest Trail. We could see the valley below us, but the mountains and ridges above were obscured by clouds. We marched just below the ridgeline, weaving over spurs and draws filled with snow patches. Not long after breaking out of the treeline we arrived at White Pass and met our friends who had came the night prior. We did not wait long however, as we were concerned about the setting sun and shortening our distance towards the summit. Although we were already over 10 miles into our day, we needed to get as close as possible to ensure maximum chances of summiting the following day. We continued contouring along the side of the ridge until it changed directions. At this point we crossed over, moving along steep snow slopes and scree. We dropped into the basin and found several rock outcroppings that were suitable for camp. We immediately starting establishing camp and melting snow for replenishment and dinner. Jonah and Chris began melting snow while I established our shelter. It was approximately 5:30 pm and we had covered 12 miles at this point. It was not too late, but our departure time was planned before 5 am and wake-up and preparation was even earlier than that. After everyone had their water filled and their dinner’s consumed we all vanished into our shelters. The weather was a constant drizzle as we settled into sleeping bags. However, at about 9 pm the precipitation greatly intensified. We dozed off with thoughts of just how miserable the following day had the potential to be as the rain battered our tents.

We woke at 2:30 am to take care of ourselves, consuming some oats and coffee within the safety of our shelter before waking the rest of the team. We packed our bags and headed to the higher rocky platform after ensuring that we had taken all of our food and trash, in an attempt to deter rodents. We lite the stoves in

a light drizzle, making sure that everyone could get some breakfast and a hot drink before setting off into the darkness. We were not concerned with leaving very early, in fact, we were purposely avoiding it. Navigating in the dark is feasible, and so is navigating in a whiteout. However, navigating in a whiteout at night is a very easy way to get lost and waste energy and time. We would depart as soon as the sky lightened enough to provide some visibility within the cloud we occupied.

We left camp at about 4:45 am. We had already discussed that we would only go as far as the team wanted to. We were not here to force anyone to summit. The next several hours went by monotonously, and at times, miserably. However, the misery was always fought off as we spoke about our favorite ways to deal with it and of past experiences. Jonah’s mantra in particular, “Today is the best day ever!,” significantly helped to improve the mood. The precipitation and wind was constant but always varied enough to keep us from losing hope. Sideways rain spattered against our faces, some boots and hardshell jackets wetted out, gusts of wind chilled us, and yet no one expressed desire to quit. Our path ventured through another basin and around a large lake. We negotiated scree and several steep snow traverses to gain the upper trail. We continued through varying terrain and weather and eventually we reached the glaciers. Visibility was still quite poor, we had yet to see the mountain at all. The terrain was similar to the Muir snowfield, low angle snow with occasional hundred foot sections of steeper snow that quickly eased its angle. In fleeting moments we could faintly make out large crevasses in the distance, but they were mainly lost in the clouds.

Upon entering the steeper slopes of glaciated terrain we roped up, almost glad because we had carried them over a half marathon at this point and had pondered their usefulness. Crampons also soon became a necessity as the snow finally firmed up above 8000 feet. Unlike Mt. Baker, the glacial terrain never truly became steep like the Roman wall. Fairly gentle slopes continued to provide passage upward as we moved from glacier to glacier. Eventually, the clouds broke for a moment, illuminating the path ahead. We finally glimpsed the summit’s slopes. We followed the final ridgeline and then crossed into a snow gully for a couple hundred meters. 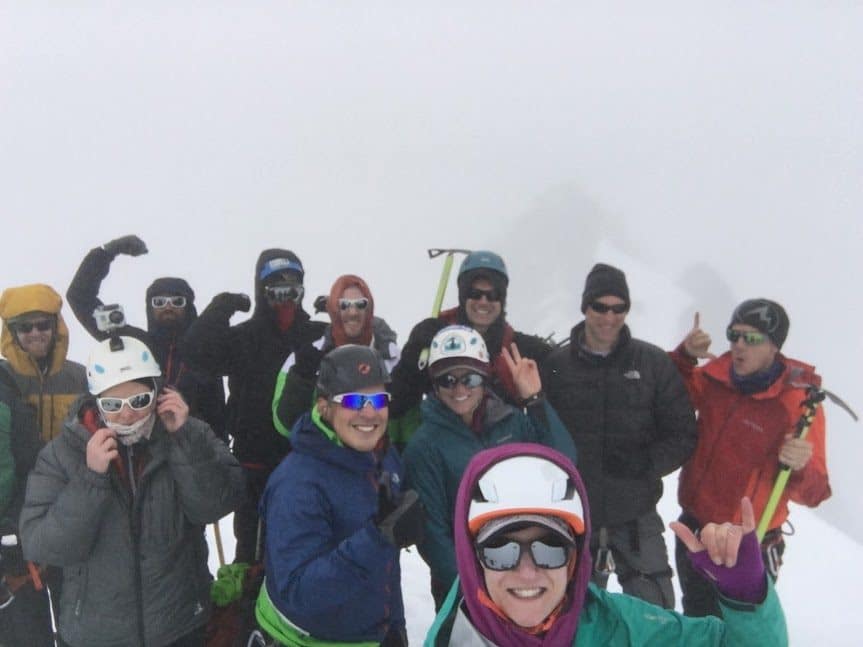 Just before noon we set foot on the elusive summit. We ate and rejoiced, devouring our lunches, which varied from bars to restaurant quality pastrami sandwiches. We did not linger long however, and soon began our descent. We only kept our crampons on for the final snow slope as they were already balling up with snow. We removed them on the rocky ridgeline and continued forward. Miraculously the weather’s onslaught seemed to waiver. We experienced cloudbreaks that lasted for minutes instead of seconds, and random bursts of temperatures on the glacier up to 70 degrees for a few moments. It was a pleasant change as we descended, finally seeing some of the beautiful terrain around us. The group’s fitness continued to impress, with no one showing signs that they had already covered over 8000 feet of elevation and over 20 miles. Sporadic layering pauses were the only thing that interrupted our momentum back to camp. The variable conditions made it quite difficult to layer effectively. 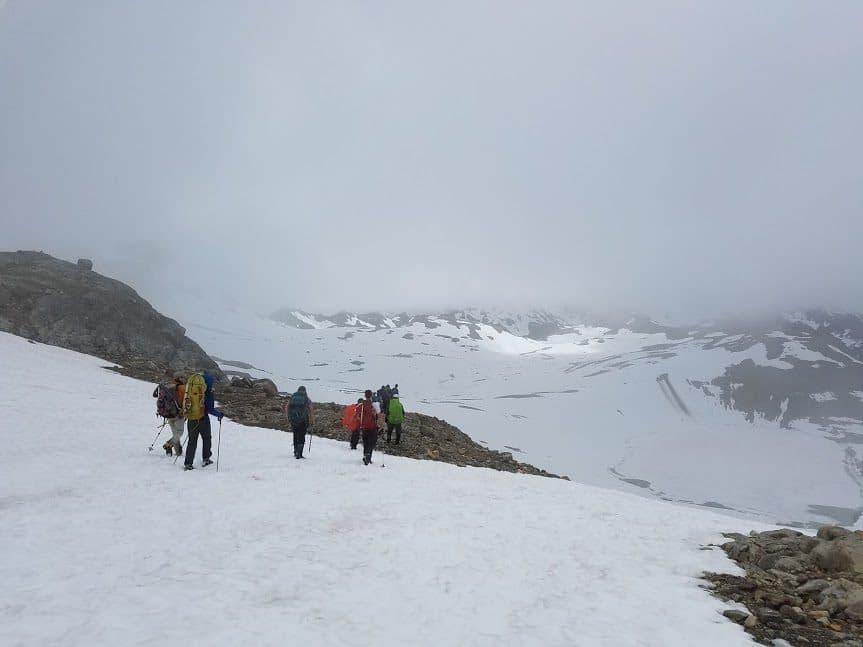 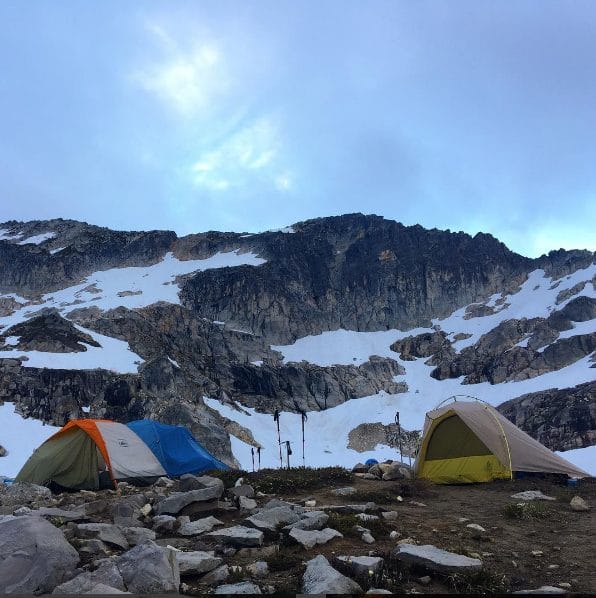 Not long thereafter we were entirely off of glaciated terrain. We dropped beneath the upper clouds and saw the entirety of the basin, which was obscured previously. Traversing the basin was pleasant without the whipping wind and rain. Spirits were high as we covered the last 2 miles to camp. Once at camp we marveled at the massive rock walls around us,seeming to have appeared out of nowhere. The weight of uncertainty left our shoulders, joining the weight of our packs now on the ground. Now all we had was a half marathon back to the cars, which would wait until the following day. We had arrived at camp at about 4 pm. Everyone began taking care of themselves in various ways, eating, immediately sleeping, and generally enjoying the knowledge that we were now safe and had completed our primary objective.

Upon entering our pyramid shelter we found that our rodent concerns were justified. Half eaten trail runners, glove liners and my now deflated thermarest greeted us. After briefly whining about my lack of a sleeping pad I accepted my less than cozy fate. Jonahprovided me with some super glue and I attempted to repair it. When I attempted to inflate it the glue had not fully dried, but Jonah’s pack’s foam insert provided enough cushion for me to sleep comfortably. I found out later that the repair worked perfectly, it just needed more drying time. Note to fellow explorers, always carry super glue or a small repair kit! The sun emerged for the first time this trip, allowing us to dry our equipment. The brazen marmot was undeterred by our presence, he attempted to eat Jonah’s wraps within 5 feet from us. We rallied to keep him at bay and then packed up all of our things to join the upper camp for dinner. 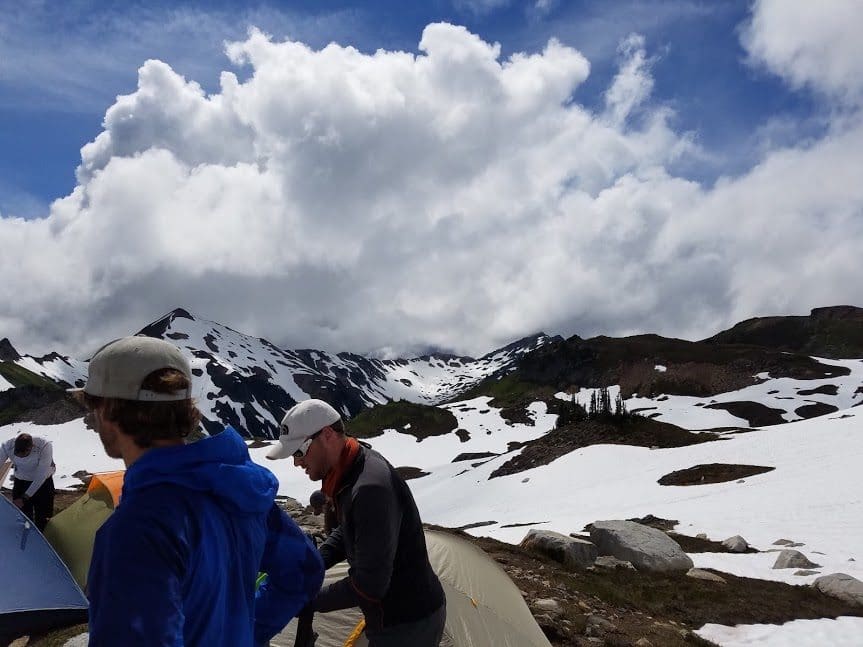 We laughed and enjoyed ourselves with hot drinks and our last dinner in the backcountry. Talk of the weather and food was occasionally drowned out by snores from exhausted team members. We all worked ourselves into a good food coma after sampling each other’s tasty snacks. We retired to bed fairly early with a plan to rise around 6 am and depart by 8. We knew entering our shelters that based on the forecast that the coming night and morning would be by far the most interesting time of our trip. The weather report before we left said to expect at least 6 inches of precipitation on the upper mountain. In the basin, we could only guess what that meant, or if in the calm of the evening that the weather system was even coming. I can report that the weather system did indeed come. Around midnight we experienced torrential downpours and lightning. Wind gusts up to 30 mph shook our tent and threatened to rip our pyramid off the ground. Fortunately before departing camp the day prior I had doubled our guylines. Our shelter would have collapsed without them, undoubtedly leaving us drenched and shivering. After several bouts of intense wind, lightning and downpours the weather finally settled to a casual drizzle. We had no issues sleeping after it passed.

We rose and drank coffee, examining the puddles turned lakes around our shelter. It was still lightly drizzling, but comparatively to our experience thus far, we found the morning tear-down quite agreeable. Breakfast was devoured and an eagerness to descend spread amongst the team. We had our fill of storms. We booted back up the path away from camp to the familiar trail. Ever changing conditions caused us to break several times in the first hour to adjust layers and footwear. Eventually we settled into a rhythm. The girls took off at a rapid pace of just under 4 miles an hour. I joked that they all had a fever and the only cure was the trailhead. We took breaks every hour to hour and a half but the fever increased. After descending the switchbacks, our knees and spirits rejoiced on the flat terrain along the river. The weather had also firmly decided on being agreeable and downright pleasant. A light cloud cover kept it from being too hot as we plodded along, aches and pains being overcome by a desire for civilization’s niceties; beer, food, comfort, and sleep.

Our blistering pace culminated in a borderline trail run back to the cars, impressive considering all the terrain we had covered. We reached the trailhead shortly after 1 pm. The Miyar Team; Sandeep, Chris, Jonah, and myself, would like to extend our gratitude to this team. This trip was a blast because of good attitudes and fitness, despite the mountain’s disagreeable weather. Increased fitness allows for covering a variety of mountain terrain quickly, safely, and most importantly, with more enjoyment. Thank you for your indelible positive spirits and previous preparations. We completed a climb that normally is done in 4 to 5 days in 3! Thanks again from Miyar and see you on the trails! 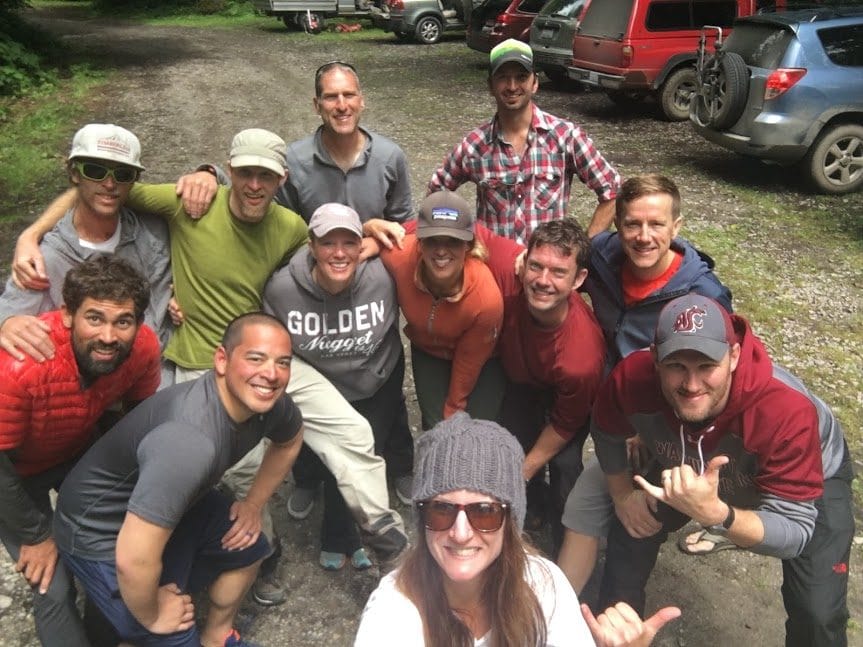 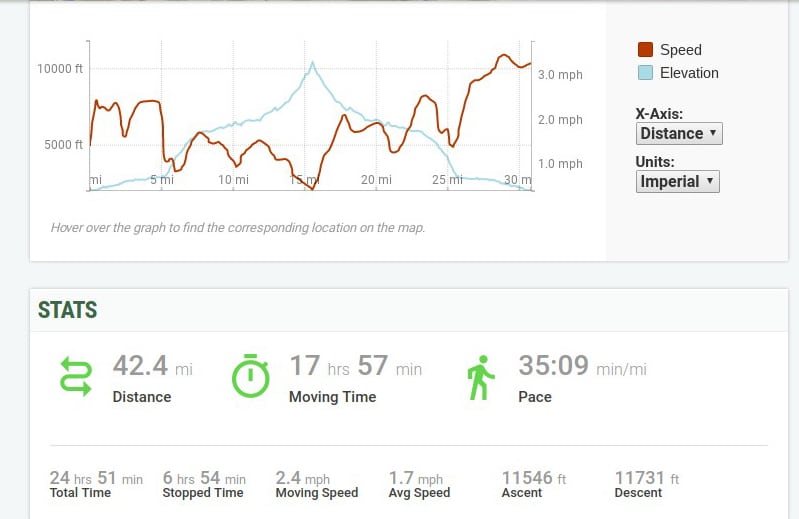