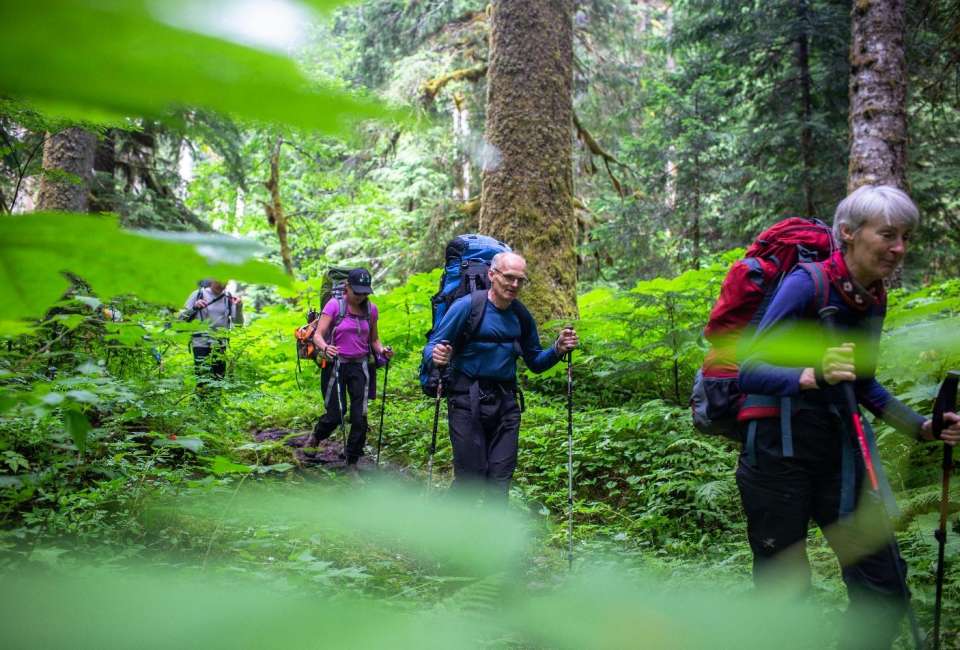 
Glacier Peak (Dakobed) is the oft-forgotten and the most geographically distant of Washington’s five major volcanos. It was nearly three years after moving to Washington State that I even heard about Glacier Peak. The Glacier Peak climb is unlike any other in the state, the isolation turns the climb into a multiday trek rather than a typical climbing weekend. To reach the base of the mountain one treks through towering rainforests, alpine meadows, and ancient rocky plains left behind by retreating glaciers. It quite reminds me of Bilbo Baggin’s journey to the Lonely Mountain in Tolkien’s The Hobbit. Not only is Its easy to forget that we are not just climbing mountains, but volcanos with active records. Mount Saint Helens erupted just forty years ago, and geologists estimate Dakobed last erupted in 1700, a blink of an eye in geologically.

The nine of us forming this fellowship reached the North Fork of the Sauk Trailhead on an overcast Thursday morning. After formally meeting everybody and discussing the plan for the trek, Charles, Lucy, William, Jeffrey, Tracy, Seth, Jonah, Bill, and I entered the rainforest. I had forgotten how large the trees were since my last trek. Douglas Firs and Western Red Cedars ten feet wide towering like silent sentinels as they protected the ancient forest. 2.5 hours and 5.5 miles after starting, we reached the remnants of the Mackinaw Shelter, an old horse camp at the base of the 4-mile climb to White Pass. 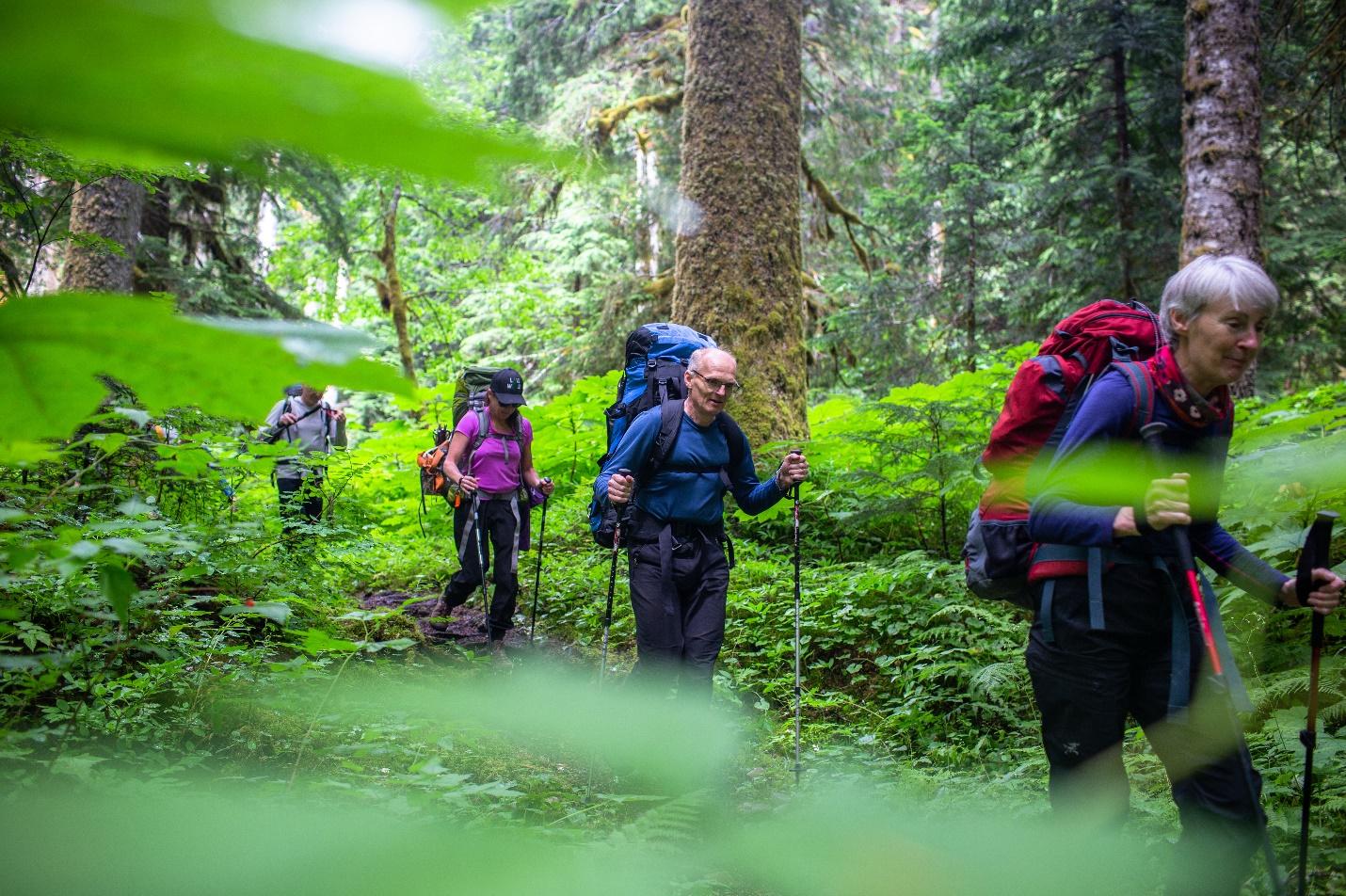 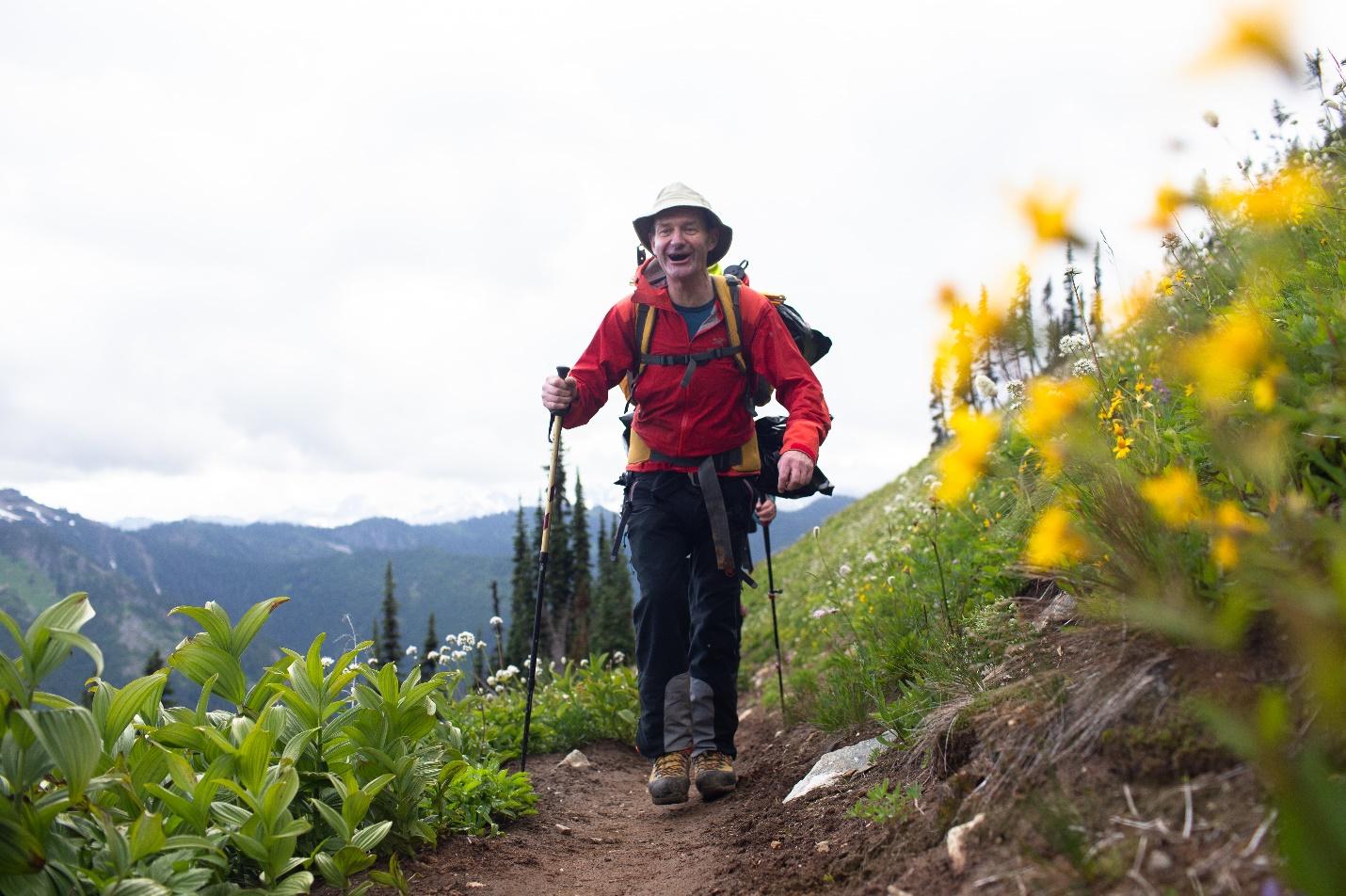 Overcast skies protected us on the three-hour climb to White Pass. The trail is south facing and often exposed to the sun, in warm weather this climb can be a real struggle. We made camp that afternoon in a light drizzle as clouds rolled through, giving us small windows of the scenery to come.
On day two of the journey we woke to a light rain, so we deliberately took a late start. Today is our “easy day”, our primary objective to move camp 4 miles to Glacier Gap and learn valuable snow skills such as self-arrest. Four miles might not sound like much, but it’s on a rocky and undulating ‘goat path’. About a mile from Glacier Gap, encompassed in thick fog again, we decided to make camp early. It meant slightly further on summit day, but we would have much lighter packs. The views would be the same from each camp – fog. We went to bed early that night, preparing for our 2am wakeup. 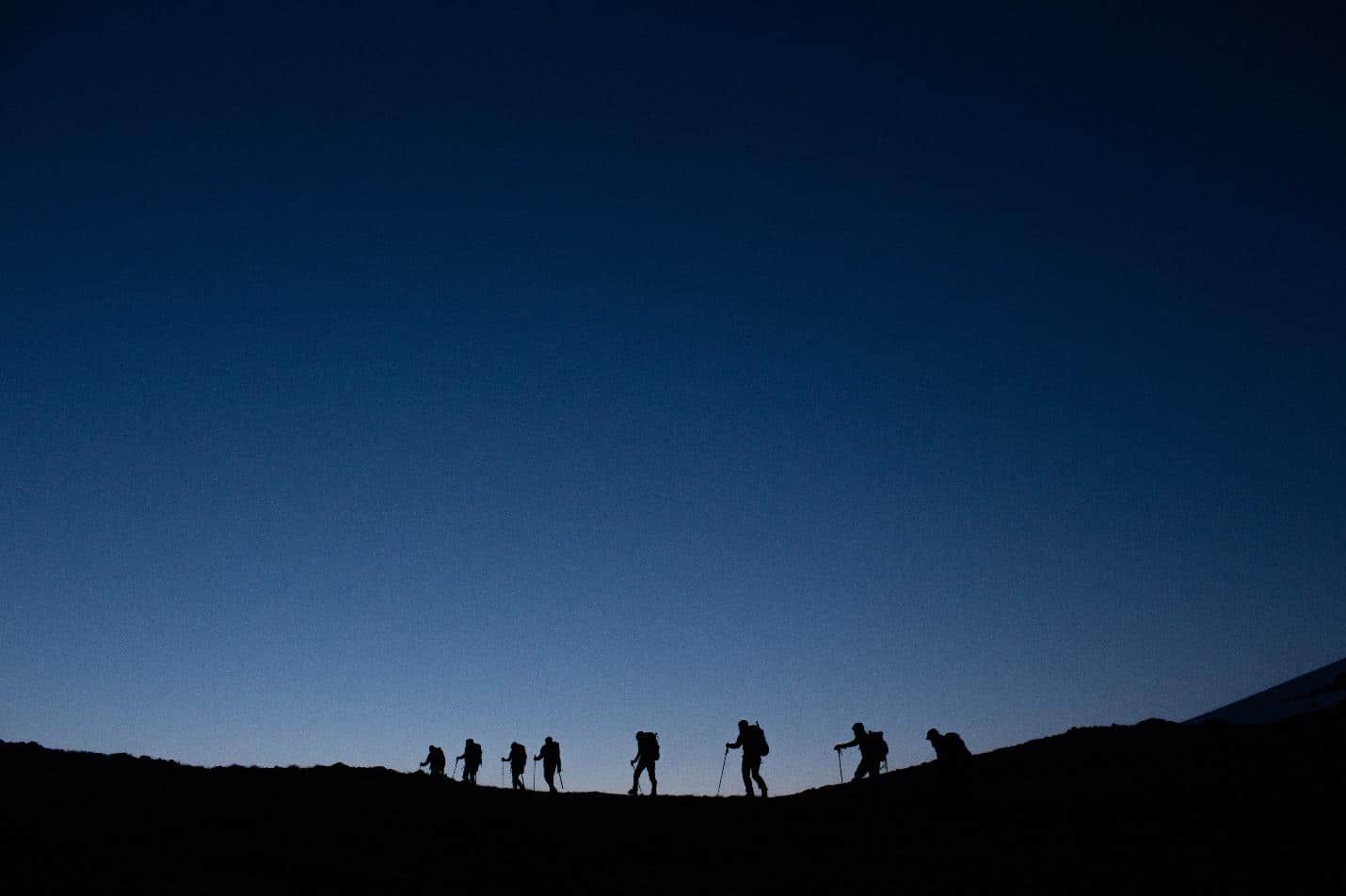 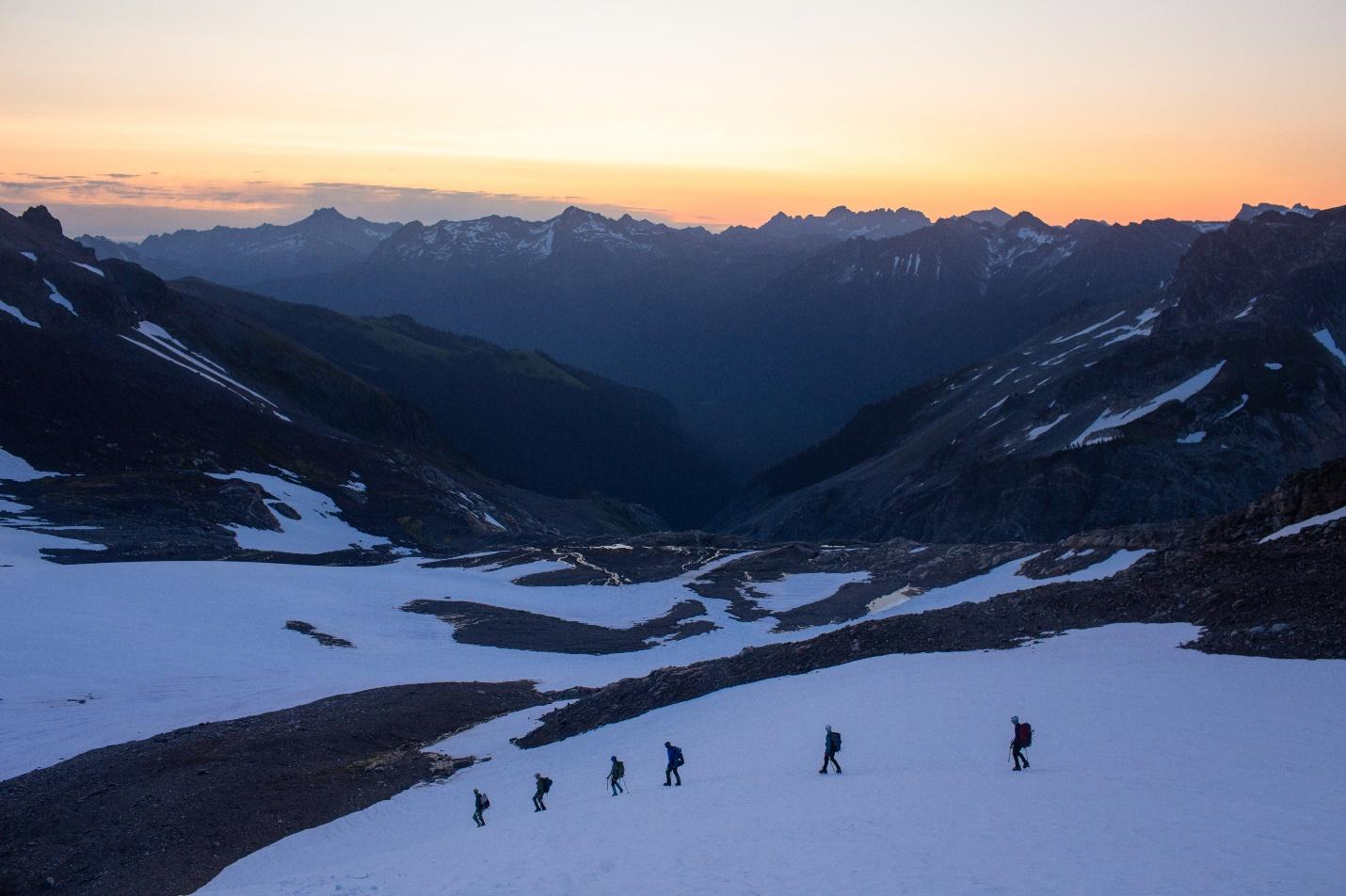 Descending to Glacier Gap; Fortress Mountain and Tenpeak Mountain in the background 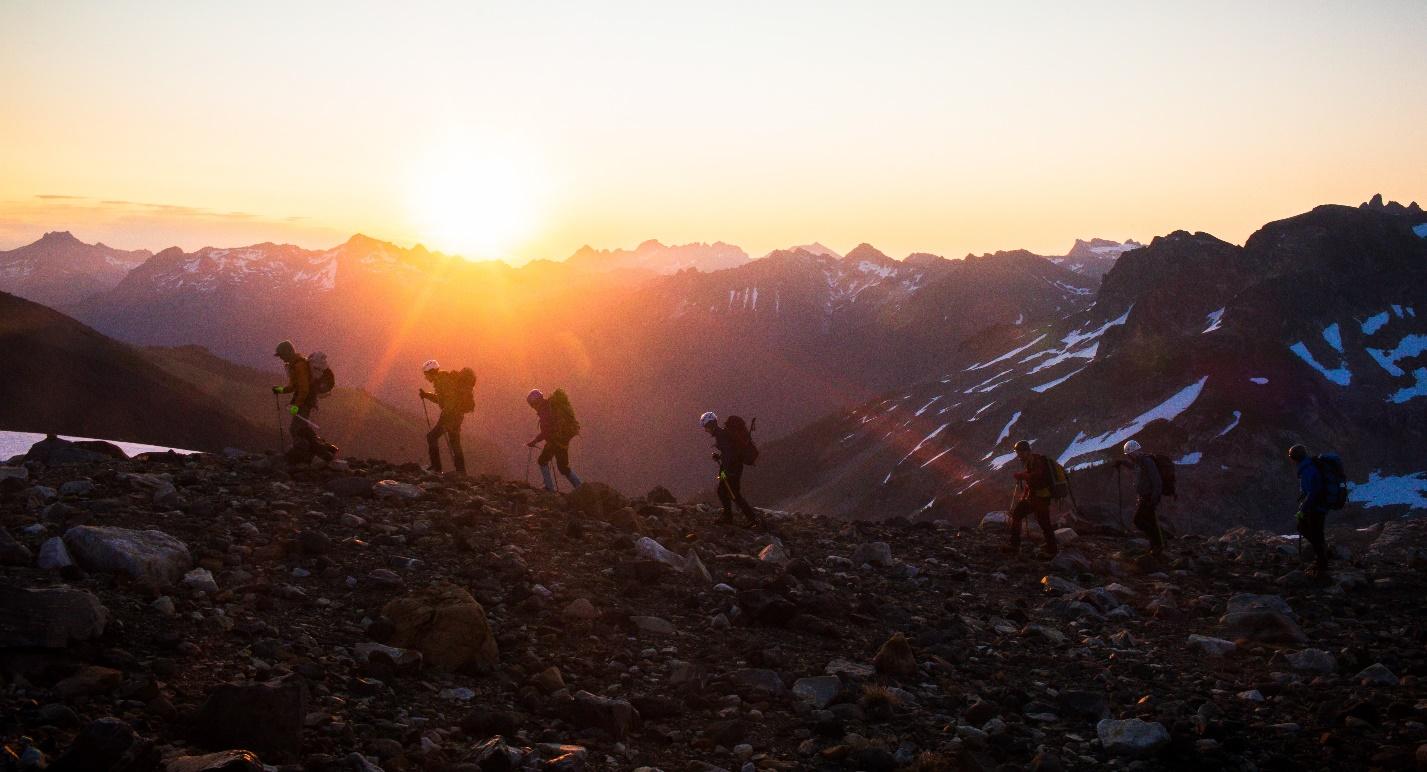 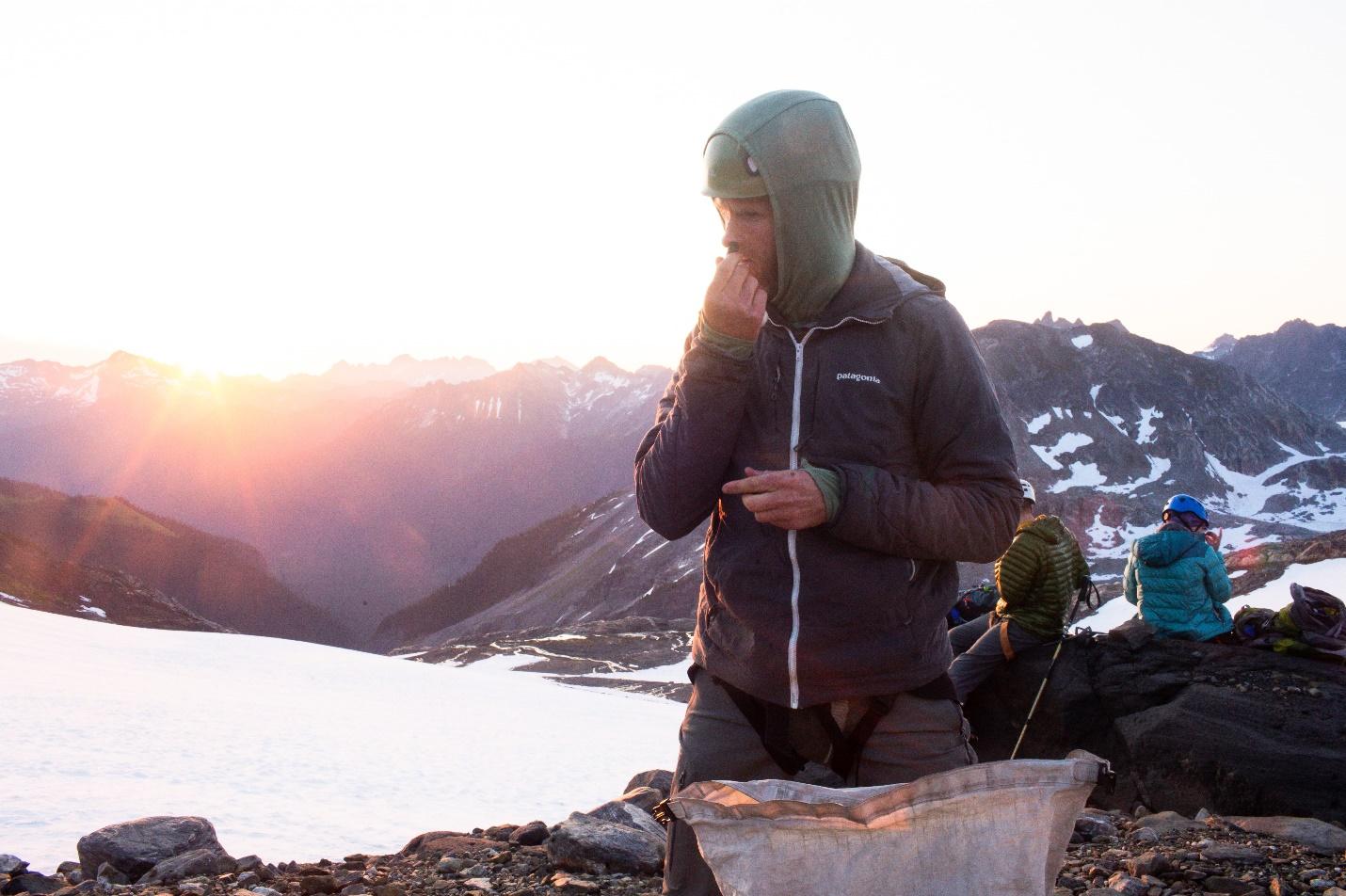 Lead Guide Jonah demonstrating the proper way to apply chapstick to your nose.

We lost and quickly gained back some elevation as we crossed through Glacier Gap, hiking the lower rocky alpine slopes of the peak, ascending an ancient lateral moraine. Around 7,800ft we left the trail, roped up, and began climbing the Cool Glacier. The lower section of the glacier was crevasse free, but had lots of recent rockfall from the cliffs of Disappointment Peak above us. The sun quickly rose and we began delayering, stripping to our sunshirts and applying sunscreen as we prepared for the final summit push. After passing several medium sized crevasses, we reached the Disappointment Peak col at 9,600ft and unroped. There would be no more crevasses from here to the summit. 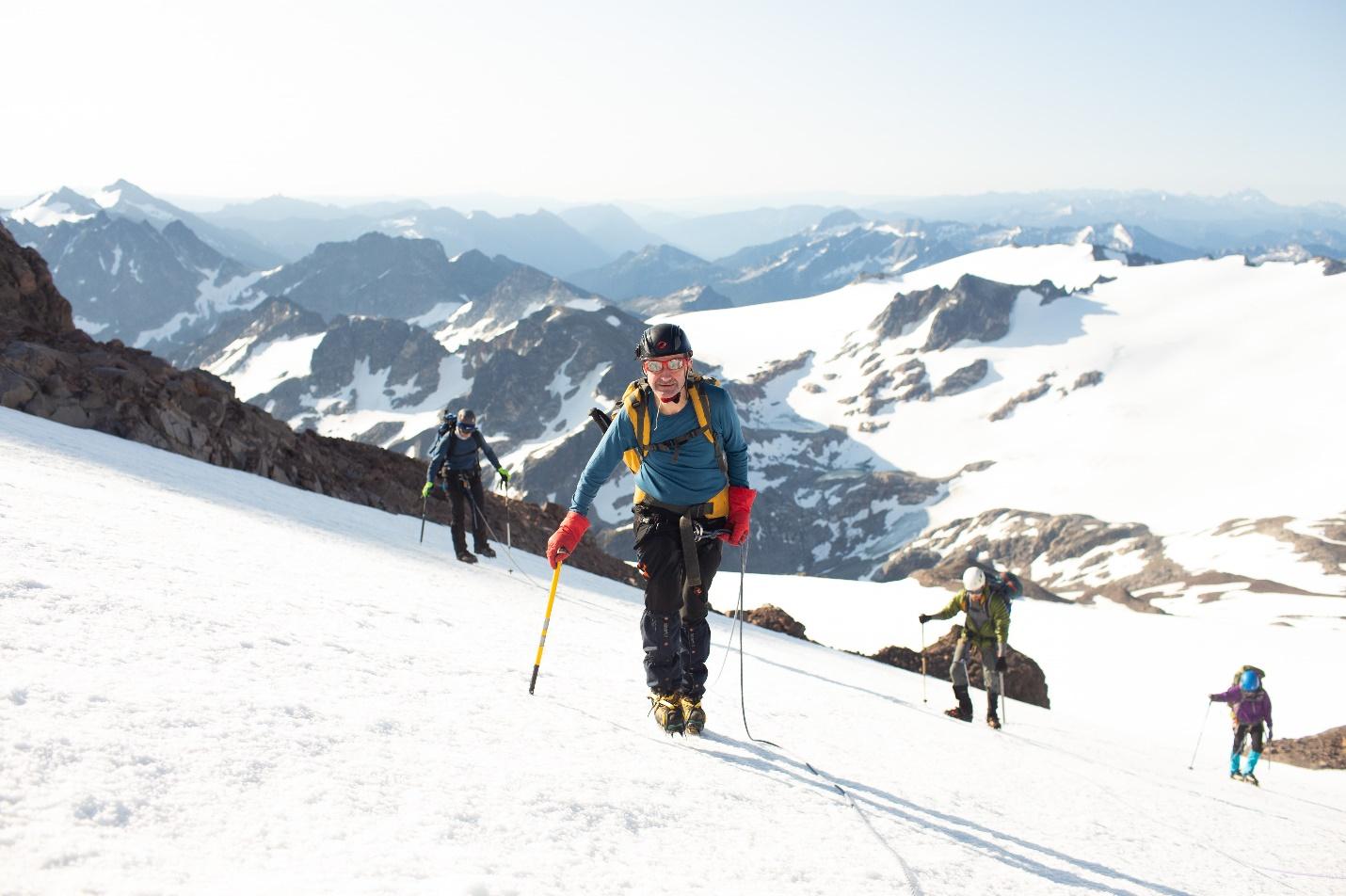 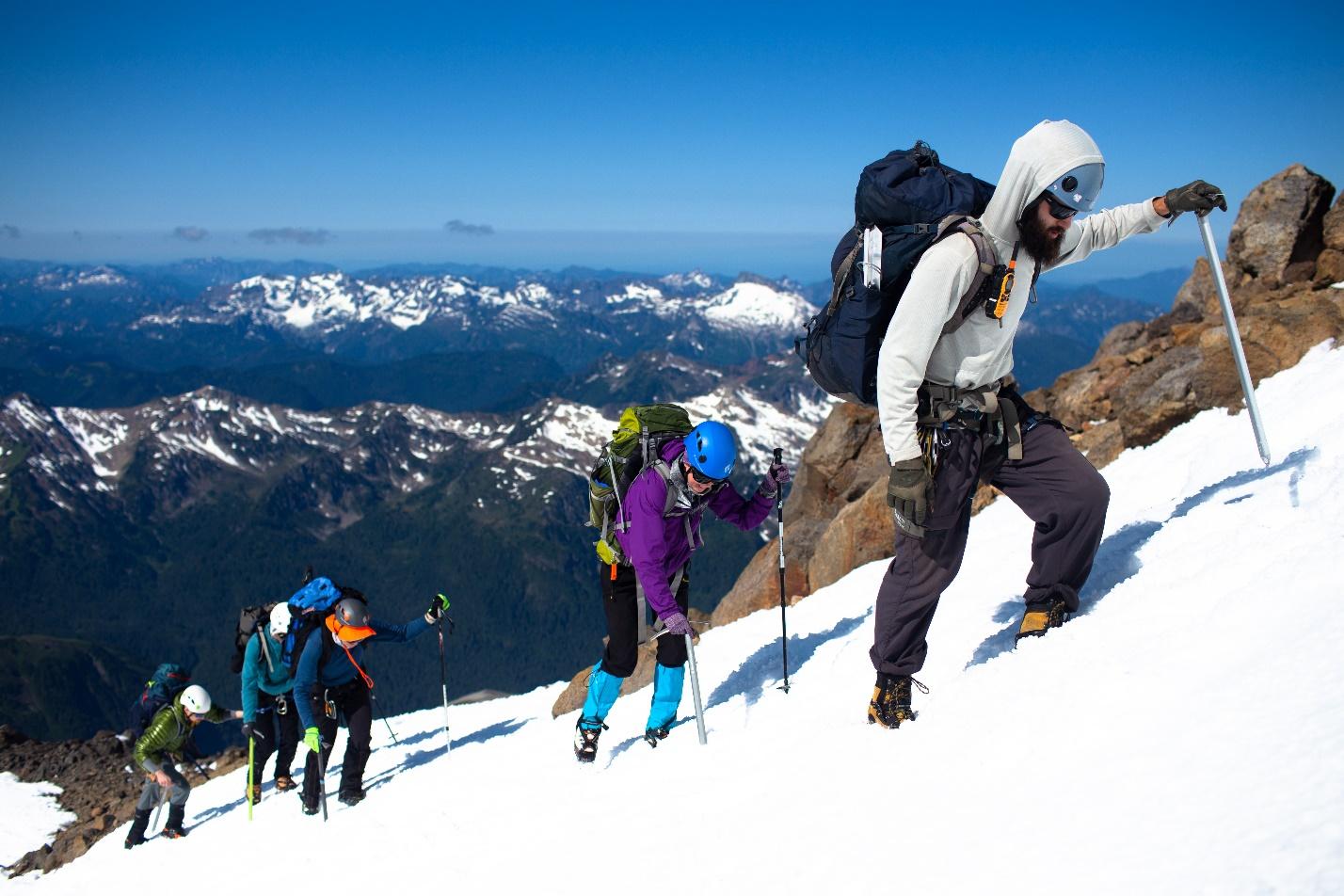 The final 900ft to the summit start out as a steep volcanic dirt trail before transitioning to 35-degree snow. With everyone’s spirits high, we summited around 9:45 and had panoramic views of the Cascades along with no wind. On the summit we watched a team of three climbers finish their climb from the remote Kennedy Glacier on the north side of the mountain – sounds like another route being added to the bucket list!
After taking nearly 700,000 selfies on the summit, we started our descent 45 minutes later. We were all super stoked and enjoyed the grandeur of mountains stretching in all directions – Rainier, Stuart, Shuksan, Dome, Bonanza, every major peak was visible. 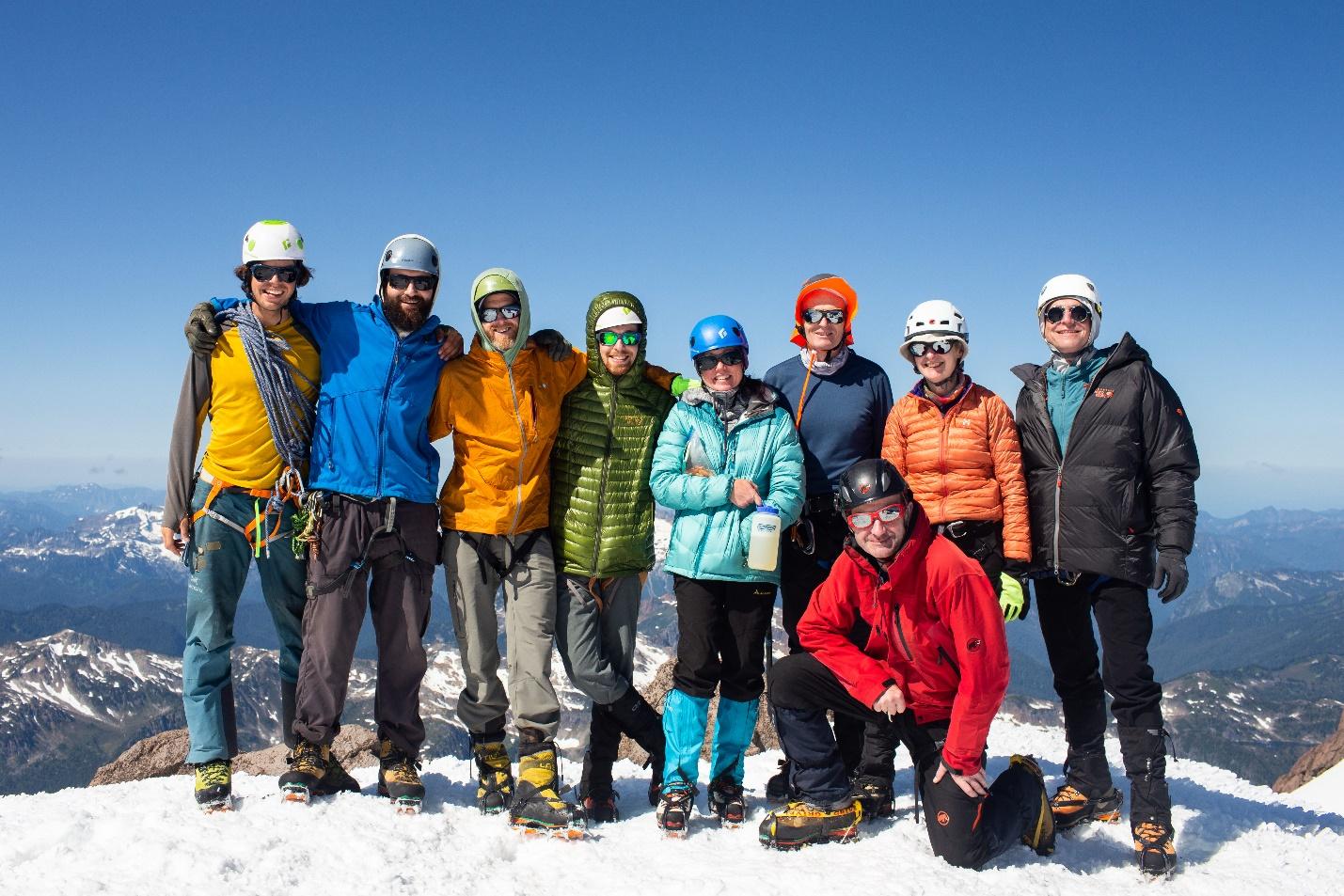 Team Miyar on the summit!

Most climbing accidents happen while descending, so thankfully our descent was uneventful. The original plan was to return to camp, rest, then move camp back to White Pass, but we were all fairly tired, so we decided to wake a few hours earlier the next morning instead. It was the right call. We were back at camp around 3ish, which gave us plenty of time to decompress, go swimming in a freezing alpine lake, and eat dinner and drink whiskey while watching the sunset. 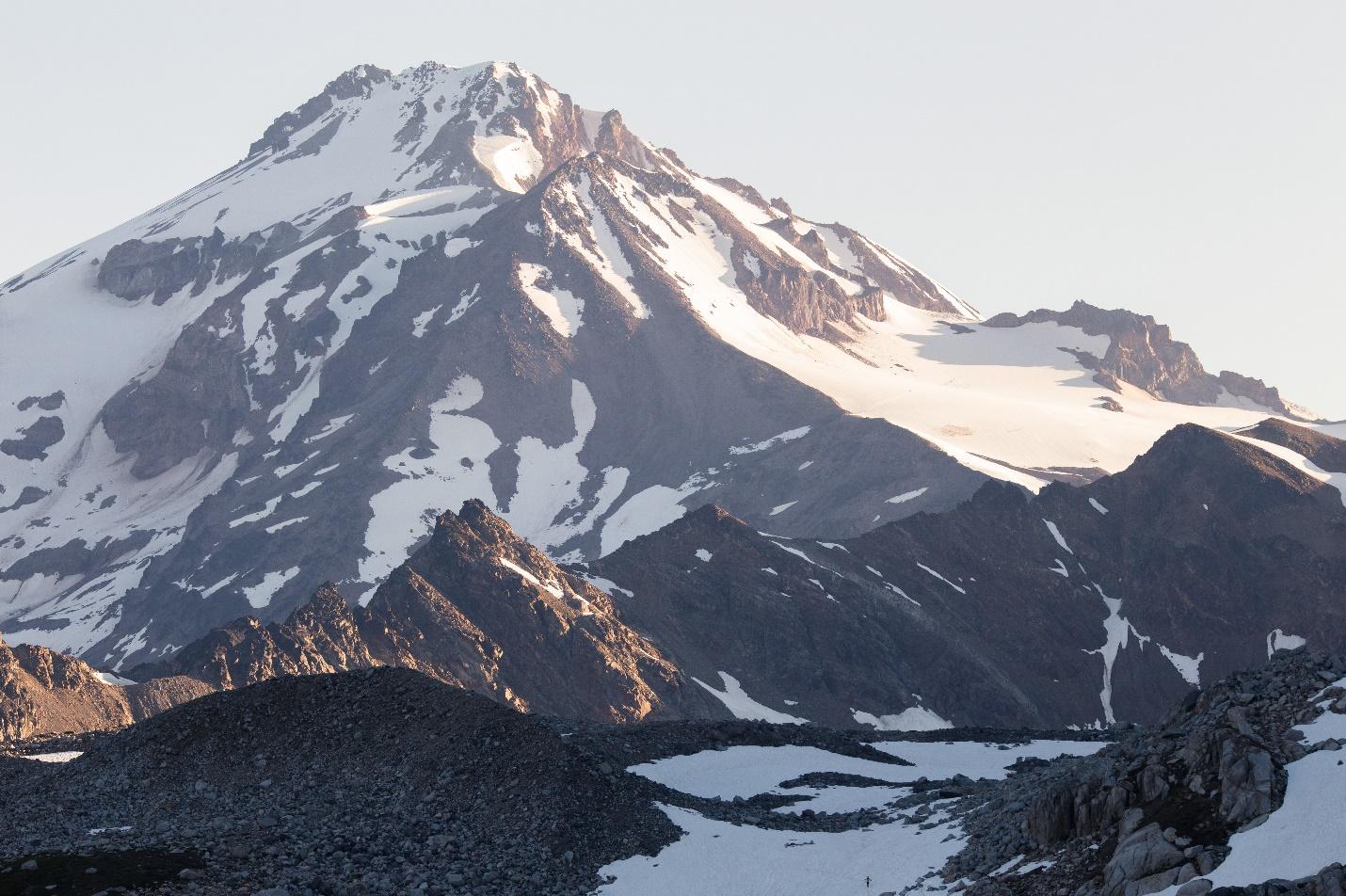 One final view of Glacier Peak (aka the lonely mountain)

The morning of the fourth day we woke at 5am, packed camp, and hit the trail at 6am. Two hours later we reached White Pass, took a quick break, then started down the long series of switchbacks to Mackinaw Shelter. At the bottom of the switchbacks it’s easy to think that you’re almost back to the trailhead, that it’s only a short hike through the rainforest, but short is relative, and it was still 2.5 hours of solid hiking to reach the trailhead by 2pm. What a great weekend, and we finished it by eating burgers and fries at the Tipsy Cow in Woodinville. 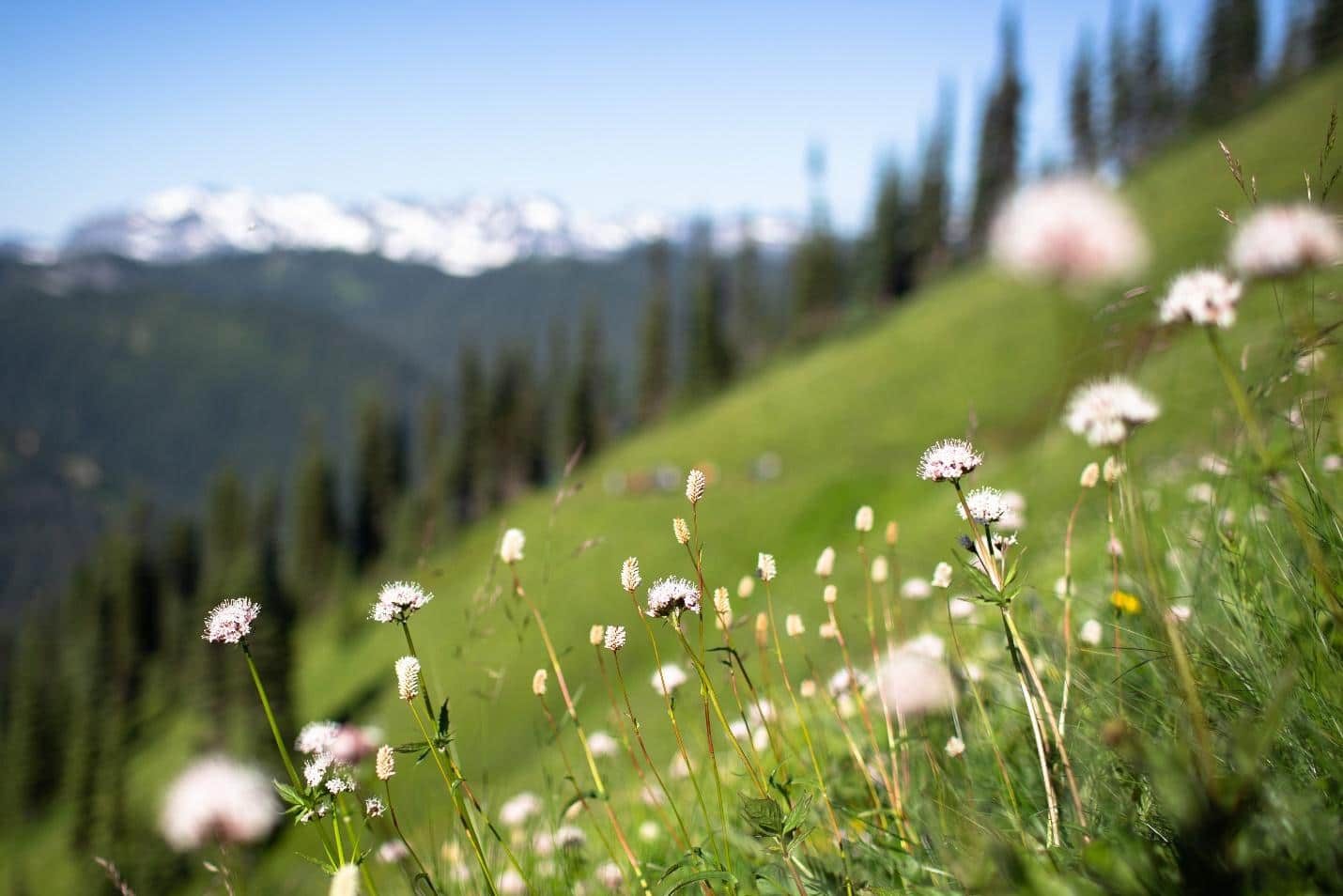 Subalpine meadows by White Pass; Monte Cristo and Cadet Peak in the background 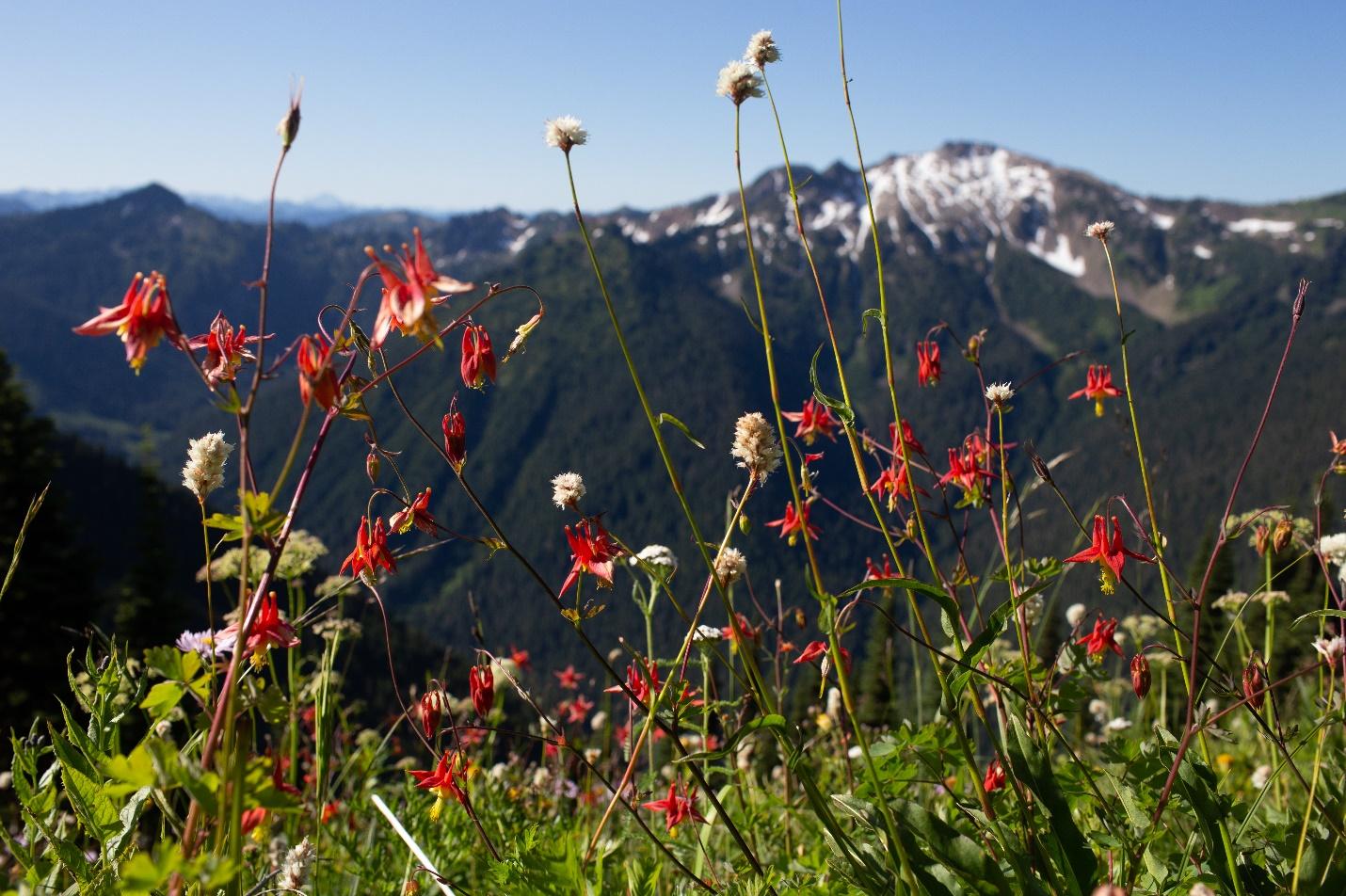 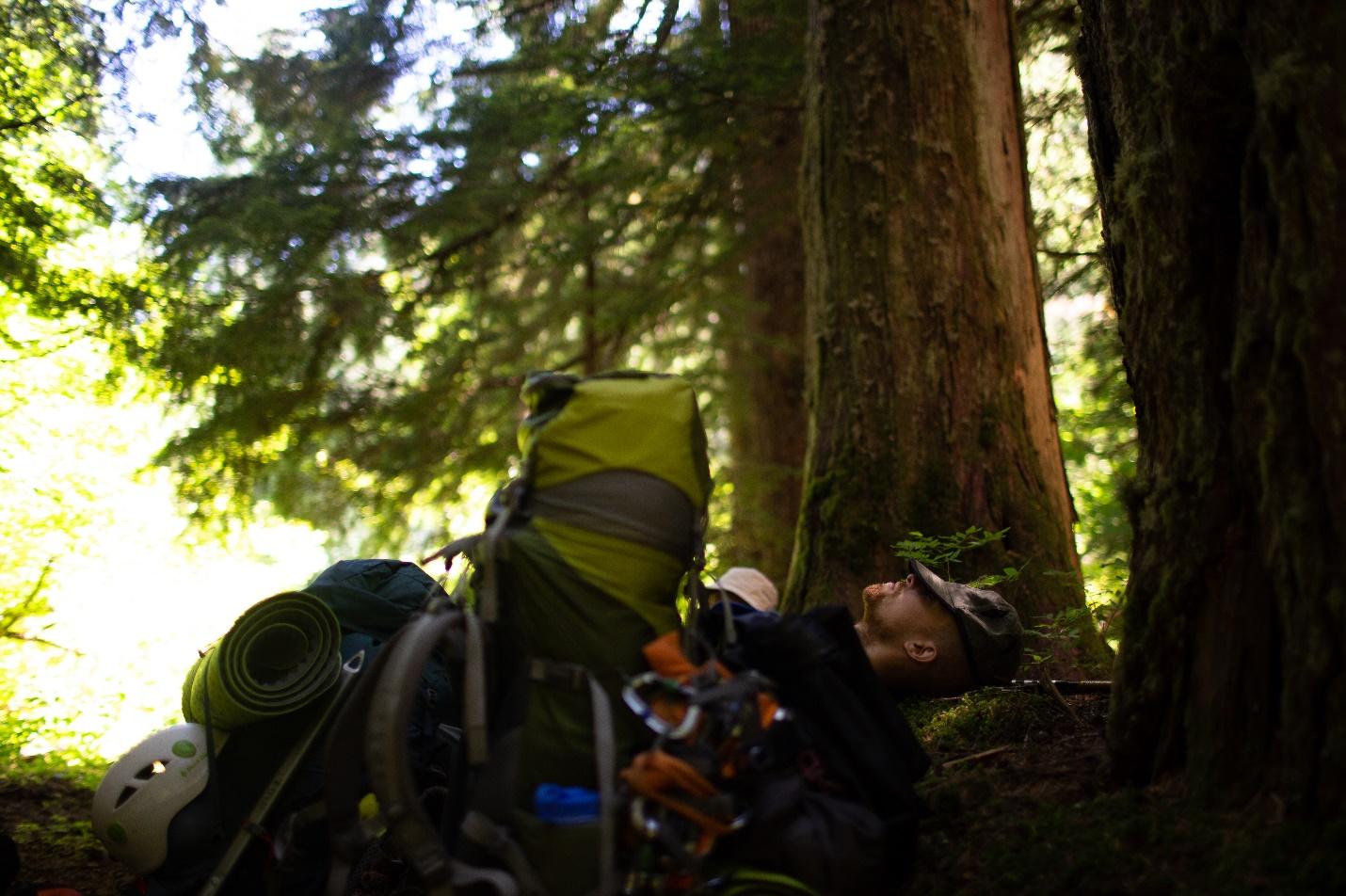 Exhausted, but nearly back to the car

If you’re thinking about climbing Glacier Peak, I’d recommend going in early July. The vast majority of the snow has melted, wildflowers blooming, and the bugs are not yet out. I’ve been in late July and also early August, the mosquitos and flies assaulted us while we were in the forest and subalpine areas.
Glacier Peak is tied with Mount Rainier as being the most strenuous volcano to climb in the Cascades. It might not be as tall, steep, or glaciated as Rainier, but it has more elevation gain, nearly double the hiking distance, and a remote factor that changes the entire dynamic of the trip. Matt Bunker, Apprentice Guide 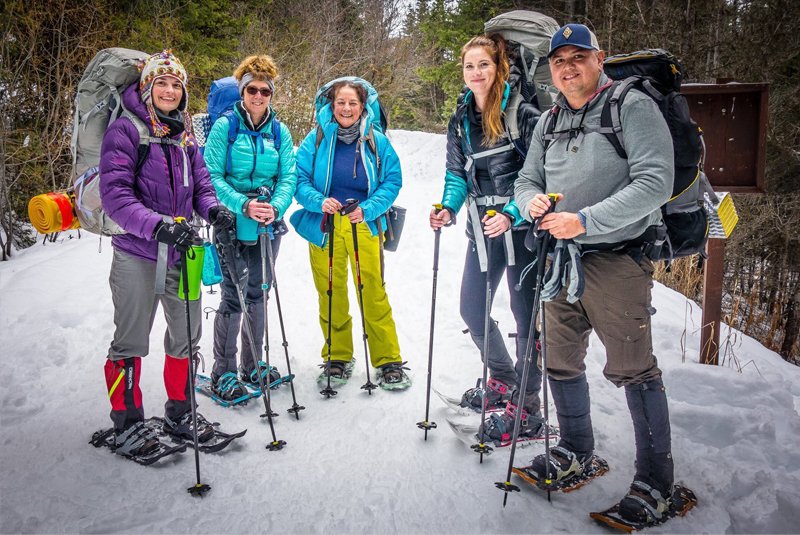 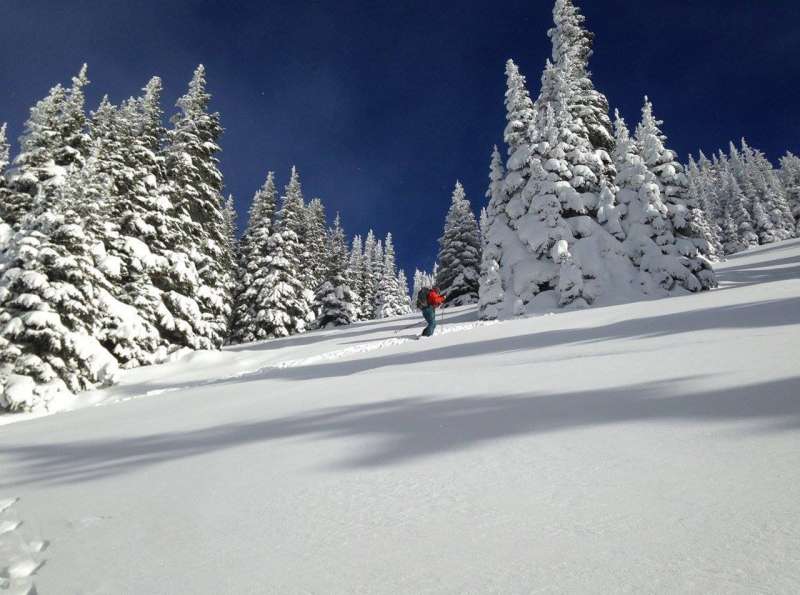 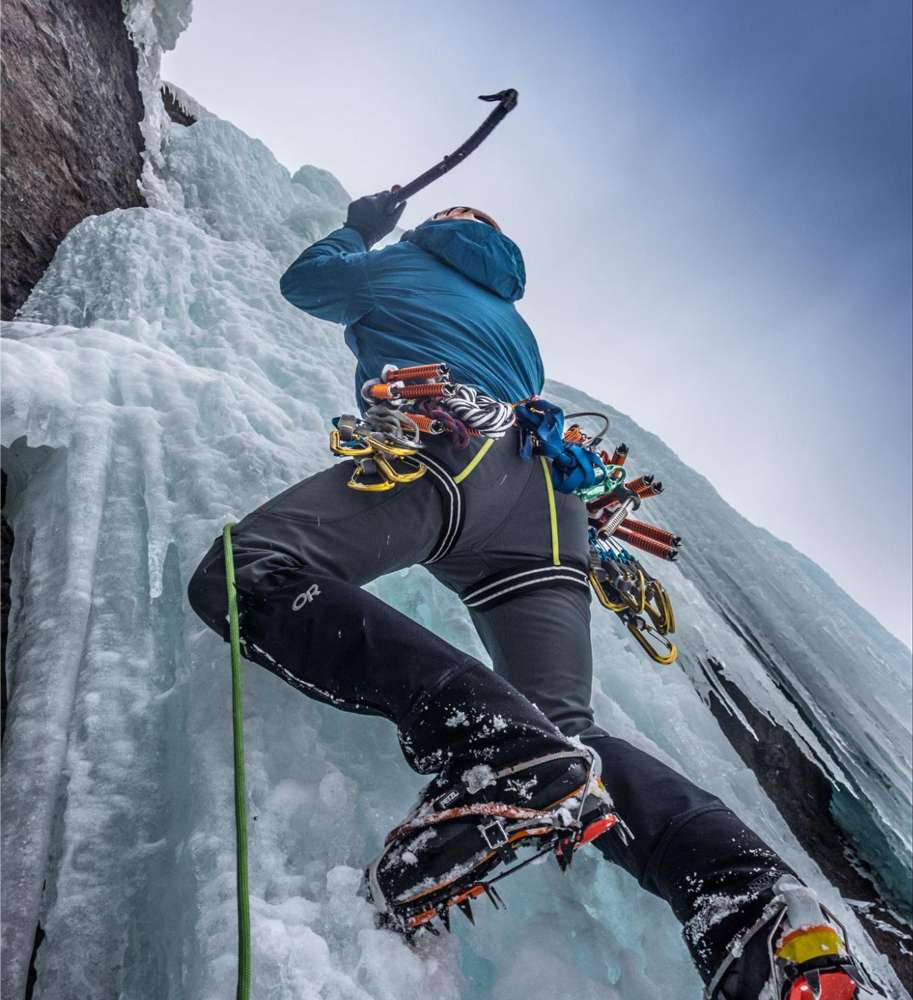 Climbing Cleopatra’s Needle in Hyalite Canyon with a pair of Petzl Lynx crampons.

How to Choose Crampons 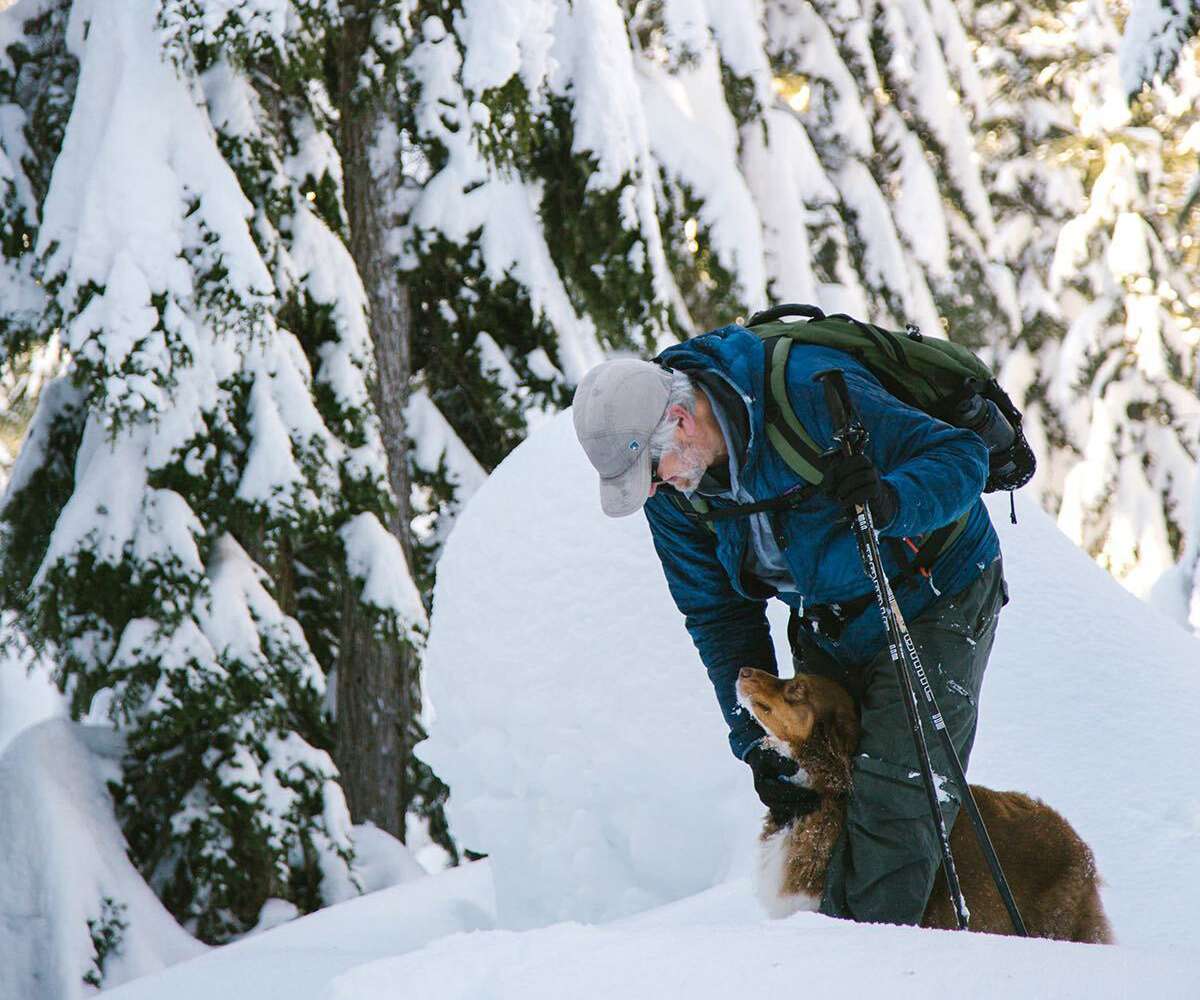